A candle before the limitless ocean of God 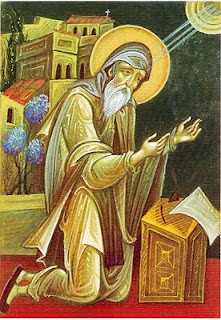 "We can know God in the same way a man can see a limitless ocean when he is standing by the shore with a candle during the night. Do you think he can see very much? Nothing much, scarcely anything. And yet, he can see the water well, he knows that in front of him is the ocean, and that this ocean is enormous and that he cannot contain it all in his gaze. So it is with our knowledge of God." -St. Symeon the New Theologian.

I stumbled upon this quote from St. Symeon the New Theologian recently while reading a book on contemplative prayer, and I was instantly struck by the Byzantine mystic's great humility before the immensity and elusiveness of God. (I should marginally note, however, that despite his appellation of "new," Symeon lived from AD 949 to 1022, which makes him rather old to those of us in the Western Church, and yet relatively recent within the Greek Orthodox theological tradition.)

In any event, Symeon's words cut me to the quick during a period when I encountered a lot of polarizing language from several quarters about orthodox belief, right doctrine, and base heresy. It issued from the mouths of Catholics and Protestants, conservatives and liberals, women and men. I heard it in the pulpit, saw it on Facebook, and witnessed it in casual moments in the sacristy. And I blush to admit that I even had my own moments of theological rigidity. Mea culpa. There was much invective about who was right and who was wrong, and I noticed that rather than bringing people together, this language alienated fellow brothers and sisters in Christ. More than the content of the claims, it was the meanspiritedness with which some of these denunciations and differences of opinion were delivered that disturbed and saddened me.

Now, I consider myself to hold quite orthodox beliefs--the Trinity, the divinity of Jesus, bodily resurrection from the dead, the Real Presence of Christ in the Eucharist--and yet I must still acknowledge that doctrine is but an imperfect human description of God's reality. We often treat doctrine as if it were empirically provable according to modern standards of scientific evidence, rather than as a signpost that points to a mystery we explore through stumbling and groping in the dark. Symeon rightly describes our limited human faculties as a candle flickering weakly before the immense mystery of God.

I am not, of course, suggesting that our inability to comprehend the fullness of God through doctrine should lead us to discard what the Church teaches. Doctrine is an important starting place for discovery, and it reflects centuries of the Church's collective wisdom and insight that merits preservation. That great Archbishop of Canterbury, Michael Ramsey, described the traditions of the Church, including doctrine, as the "divine paradosis--which is the Greek word for something that has been 'handed over' or 'passed on.'" Ramsey explains the value of our theological patrimony in the opening pages of The Anglican Spirit:

For when we Christians speak of tradition, we mean the experience of the Christian community lying authentically within that which God through Christ has handed over for the revelation of himself and the salvation of men and women everywhere.

Ramsey is pointing to the truth--not the fact--embedded in tradition, and yet recognizing that paradosis involves authentically engaging with something that is beyond our full understanding. I am cautioning us, therefore, to model Symeon's posture of humility in both the experience of and speaking about God. Those that assert with such confidence that they know exactly what God is about and treat with contempt those that differ in their religious convictions are falling short of God's call to humility and erring dangerously into idolatry by constructing God in man's image, rather than the other way around.

In the midst of this divisive talk, a very wise priest and friend stepped into the fray and gently counseled those who labeled themselves as "faithful Catholics" (being one himself) to be faithful by practicing another Catholic virtue, generosity, to acknowledge that others might have a piece of this truth of God that they did not possess. Perhaps their candles before the immensity of God reveals some detail that has escaped us. Generosity and humility cohere well with the Church's notion of its catholicity or universality. To be generous, without being rigid or supercilious, can be helpful in engaging with people at various places along the theological spectrum. One may be a faithful Catholic, or a faithful Protestant, or a faithful evangelical, or whatever, by acknowledging our own limitations before the limitless ocean. Generosity brings us closer to realizing the four marks of the Church, what we call the esse or essence of the Church: one, holy, catholic, and apostolic.
Posted by Fr. Ethan Jewett at 10:57 PM