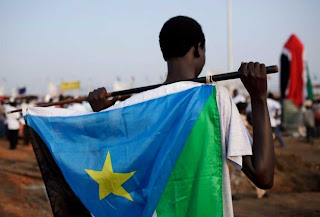 Yesterday, after years of civil war, bloody disputes over oil fields, and sectarian enmity between Christians and Muslims, the Republic of South Sudan became a sovereign nation. This should certainly be news for rejoicing, to see peace emerge in a decisive way in one of the most violent regions of the globe. More locally, in the last several weeks, the Lakeview neighborhood of Chicago in which I live has been shaken by a wave of violence and mob action that has generated much fear and racially charged invective.

These two events have preoccupied my thinking, making me wonder how to move forward toward peace in an atmosphere of such rancor and mistrust. In both the Sudanese and American situations, violence has constellated as it always does around the central question of power: who has it and who doesn't. Control over the rich oil fields of Abyei has been a critical (and still unresolved) sticking point in the struggle between north and south in Sudan. In Lakeview, we have seen fear bring to the surface unresolved issues of race and economics that pit white and black Americans against each other.

I am not, of course, going to offer a tidy, simplistic solution to the complex dynamics of either situation. I am convinced, however, that peace is the product of a long, painful and sacrificial process that requires us to attend to the undergirding issues of power that drive violence. It is very easy to caricature and "other" those on the opposite side of the issue, whether Arab or black, Muslim or Christian, gay or straight, black or white, wealthy or poor. To resort, for example, to racial or ethnic stereotypes is to ignore the deeper systems of oppression that drive American society. To talk about religion without talking about oil or history or ethnicity is to oversimplify the Sudanese situation. Expanding the discussion does not mean a denial of the violence that is being committed, or exoneration of those committing it--far from it--but doing justice to the complexity of human society.

Peace cannot emerge from violence by merely skimming the surface of the issues at play in conflict. Peace requires a commitment to going deeply into the intricate network of drivers and systems that undergird violence. And, lest I be accused of Pollyannaish optimism, I admit that in doing such work, one may well discover that there are some for whom violence, chaos, and retribution serve their self-interest. These people may want no part in establishing peace. That is a sad reality. But despite such obstacles, it is only through both sides working in solidarity with each other, through painful perseverance and listening to difficult truths, that peace can be achieved. Today is indeed a day of celebration for The Republic of South Sudan, but it would be naive to regard peace as a fixed state. It must be an ongoing commitment, ongoing labor. There is no doubt much work ahead for the South Sudanese, as it is for us in Lakeview.

As we live into this difficult work may we ground our vision for the future in the words of St. Paul's Letter to the Philippians: "And the peace of God, which surpasses all understanding, will guard your hearts and your minds in Christ Jesus." Lord Jesus, guard our hearts and minds, that your peace may prevail in South Sudan, in Lakeview, in all the broken corners of the world.
Posted by Fr. Ethan Jewett at 3:17 PM