The Episcopal Church commemorates John Henry Newman on February 21st, and it might strike some as odd that Anglicanism should honor a man who abandoned communion with the see of Canterbury to join the Roman Catholic Church.  The question of Newman's place and heritage within Anglicanism is perhaps all the more timely and controversial, given the recent establishment of the Anglican Ordinariate, which allows entire Anglican congregations to enter into communion with the Holy See while preserving some markers of Anglican worship and spirituality.  However, the deeper questions posed by Newman's inclusion in the Episcopal Church's sanctoral Kalendar, as well as the Ordinariate, are: how are we to understand our relationships with our brothers and sisters in Christ once they have swum the Tiber? And how should we remember them in the long view of history? 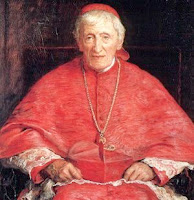 There are no doubt many reasonable answers to these questions, but my own response seeks to embrace the whole course of a person's process of spiritual and theological discernment, rather than to limit my focus to his or her ultimate destination. With Newman, I attempt to view the man's life globally, rather than as a figure at only one point in time.  Indeed, I do not have to agree with Newman's decision to go to Rome in order to value his writings and work as a Church of England priest within the Oxford Movement.  I can agree with his subtle theological arguments, without assenting to the conclusions that he draws from them, most particularly, that Rome is the only true Church.  When I read Newman, I come to a very different set of conclusions, perhaps much as Keble or Pusey did.  Some Catholic Anglicans have arrived at convictions that have called them to Rome, while others have arrived at ones that keep them in Canterbury.  (And let us not forget the scores of Roman Catholics who have swum the Thames for similar reasons of conscience and become Anglicans!)

What I respect above all, however, is the common struggle we have experienced, wherever each of us has landed.  I have been moved by the accounts of Newman's theological wrangling and nagging conscience, for they are reminiscent of my own struggles to formulate solid theological propositions and construct an Anglo-Catholic identity within the Episcopal Church.  Newman and I doubtless wrestled with some of the same theological problems, and so I find much solidarity and companionship in reading about his journey, which had great integrity.  As one of my theology professors in seminary insightfully noted, "every theological proposition solves one problem and opens up another."  I think we can thus thank Newman for showing us that going to Rome does not necessarily get round the difficult theological questions; it may only delay answering them and sometimes can even expose new problems.  Indeed, for many in the Church of England, such as Keble, Pusey, Selwyn, Gore, and countless others in later generations, giving up on the hard questions related to the Catholic nature of Anglicanism was not an option; they stuck it out, wrestled with it some more, and got us a bit closer to the truth.  Newman explored one solution, and his Oxford colleagues explored others. 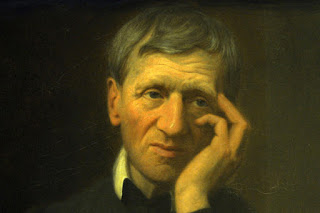 Despite his decision to quit Anglicanism, I am indebted to Newman, as well as to his Oxford companions, for the inspiration he has provided during my own formation as a priest.  Newman's place in the Kalendar may be justified by the fact that even now younger generations of Anglo-Catholics just like me are still drawing great strength from him, not because of what he ultimately became--a Roman Catholic--but because of what he contributed to and achieved for the Church of England, and in the fullness of time, Anglicanism.  Anglo-Catholicism might be much poorer today had not Newman been a key leader in those first formative years of the Oxford Movement.  I am therefore grateful that he is remembered by the Church, when other Anglo-Catholic luminaries, such as Frank Weston, have not been honored with a day in the Kalendar.

It can be difficult in this day to be an Anglo-Catholic, for the word means many different things to many different people, and each of us is bidden to figure out how we are going to understand and live out this identity.  Society and the Church can also be unkind in their treatment of people who use this label, sometimes based largely on stereotypes or misinformation.  Much of what Newman wrote as a catholic-minded priest in the Church of England, for example, provided deep nourishment and comfort for me as a seminarian whenever I encountered anti-Catholic prejudice and invective in both of the seminaries in which I trained.  As someone who left one faith in sad protest as an adolescent, wandered aimlessly for a couple of decades, and then found a new faith, I am inclined to be generous in my estimation of Newman.  I am sympathetic to his struggle.  So, in answer to my original question about how we might understand or remember Newman, I would say that we might respect his decision to walk apart, and yet still be grateful for the time we spent walking together.
Posted by Fr. Ethan Jewett at 5:51 PM