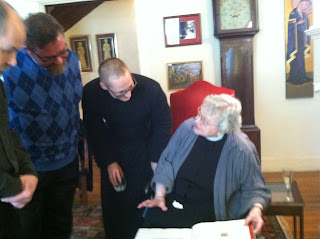 Most people think of hospitality as a structured program for greeting people on Sunday morning and incorporating them into the life of the parish.  But I'd rather talk about a very different kind of hospitality, a hospitality that is often episodic and informal.  In my six months as a transitional deacon, I've been most compelled by the way in which the programmatic has paled before the personal.  I've always believed that being a priest (and being a church) means putting relationships first.  In my view, a successful church is not one that offers hospitality out of a sense of duty, but because it is full of people that are eager to get to know and care about other people, to share in the deepest moments of their lives. 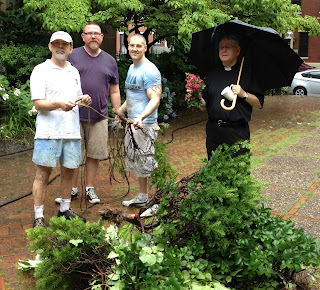 Notions like "that's not in my job description" and "I'm off the clock" are incompatible with a priest's life.  In fact, some of the best moments of my ordained ministry have been on the periphery of my official life as Curate of St. Clement's.  I have often felt more useful as a cleric sitting privately with a parishioner in St. John's Chapel teaching him how to say the daily office from the Anglican Breviary than I have at Mass laden in cloth-of-gold vestments.  Creating a harmonious altar party has probably been aided more by the laughter and prayers shared with servers in the sacristy than the hours of rehearsals we've clocked.  Parishioners and I have learned more about each other over cocktails in the rectory and in idle moments in the church office than at the formal coffee hour after high mass.  And working with parishioners covered in mud to pull out yew bushes in the pouring rain has done more to build collegiality and teamwork than any vestry retreat or strategic plan I have ever encountered.  All of these examples from my life here at St. Clement's reveal unplanned, spontaneous, and gratuitous acts of generosity and hospitality that draw people more closely together and have nothing to do with "a hospitality program." These moments teach us to live with each other, to accept the whole person, even bits we may not particularly like about each other.  A church can't grow and thrive without moments like these. 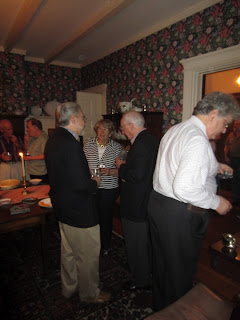 I want to be clear, however, that hospitality does not equate with clergy being hospitable to parishioners, or parishioners being hospitable to visitors.  There is nothing more humbling than visiting a homebound parishioner and realizing that you are the guest in his or her home.  A priest, in particular, becomes aware of the power he holds in pastoral situations, and it must be handled with the greatest of care and sensitivity.  In a pastoral relationship, both the guest and the host are offering each other something, and at times, it may be unclear who is hosting and who is being hosted.  As a fluent French speaker, I remain mindful that the notions for "host" and "guest" in the French language are indicated by the same word "hôte." Hospitality is a blurry subject, because at its best, it is a mutual act.  Unexpected visitors to St. Clement's would probably been shocked to hear that I get as much from the many spontaneous tours of the church I give than they do.  But it's true.  The reason is that through these little, seemingly trivial moments, a community is built--one encounter at a time, one relationship at a time.  That's the bread-and-butter of a priest's job.
Posted by Fr. Ethan Jewett at 8:35 PM