A Visible Witness of God's Love

Yesterday started out cold and rainy, and I worried that our glossy brochures and promotional items for Outfest would end up a soggy, pulpy mess.  Fortunately, Marc Coleman very cleverly set up a tent over our table to keep us dry, and the rain subsided by about one o'clock.  Within the first few hours of the event, I walked up and down the streets looking for churches participating in this big gay street festival, but found only five.  And I didn't see any other identifiable clergy there, although they could have been there incognito.  The most visible and vocal religious presence were anti-gay protestors with signs and a megaphone spewing biblical verses and hate speech at the crowd, which engaged them and defiantly screamed back.  Several people came up to us and thanked us for being there, as they gestured at the man bellowing into the bullhorn. 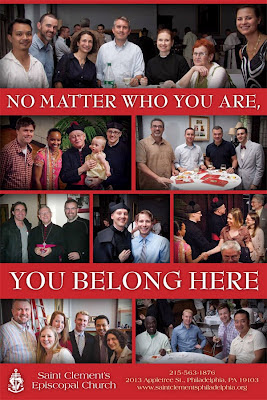 No stranger to Gay Pride parades and LGBTQ street festivals, I am pretty well inured to ignorant anti-gay protestors.  While waiting in line for the bathroom, a 21-year-old trans woman suddenly noticing my collar asked me if I had taken the protestors to task.  I said to her that there's no point in trying to shout down the crazy or ignorant, which one must be if he or she thinks Jesus hates gay people.  I told her that I found it more useful to demonstrate to queer folk that one could be both Christian and gay and to assure them of God's love.  And that's what Ron Emrich, Marc Coleman and I tried to do yesterday.  Wearing our snazzy St. Clement's t-shirts, we talked to hundreds of people about the Episcopal Church, St. Clement's, and what we believed.  "Your church accepts gay people?" one young lesbian asked astonished.  "Well our priest is gay and married, and I'm here with my husband, Marc. Our church has lots of gay people," Ron would say.  "Wow.  I had no idea there were churches for gay people."

We had several conversations like this, but mostly, I blessed rosaries--about 200 of them.  People would look furtively at our table with the various colored rosaries, at our glossy signs outside the tent, at each other, and then tentatively approach us.  I'd say, "Hi, I'm Ethan.  Would you like me to bless a rosary for you?"  "You can do that?!" one young Latina chirped incredulously.  "Sure, I can. I'm a priest. What color would you like?"  The blue and glow-in-the-dark ones were the most popular.  "What's your name?" I asked. "Alyssa."  Grasping the rosary and making the sign of the cross over it, I improvised a blessing.  "Alyssa, I bless and hallow this rosary containing the image of Our Lord Jesus Christ's Passion that you may grow in devotion to Our Lady and increase in intimacy with God. In the name of the Father, and of the Son, and of the Holy Spirit. Amen."  And then we would hand them their rosary along with our brochure on how to pray it.  People were thunderstruck that we were there giving away free plastic rosaries and blessings.  Marc, Ron, and I were equally thunderstruck by the eagerness of people, especially LGBTQ young people, to talk to us, to tell us their stories of struggle, to ask questions about God and the Church.  One young Latino asked me to bless 9 rosaries: one for himself, one for his boyfriend, one for his mother, one for his sick uncle dying of cancer ..."  A middle-aged African American man told me that it was a special day because it was the one-year anniversary of he and his partner getting back together.  "This IS a special day," I agreed.  "Would you like me to say a prayer for your relationship and to give you my blessing?"  "Oh, would you?!" he said surprised.  And so we prayed, and I blessed him.  This makeshift space had become a holy space where holy things were happening.  Marc told me that one visitor said that our tent felt almost like a chapel, to which I replied laughing, "leave it to St. Clement's to turn a few yards of nylon into a chapel."  Next year we'll bring a nice lace frontal for the table.
Posted by Fr. Ethan Jewett at 4:51 PM