Always the Same, and Yet Not 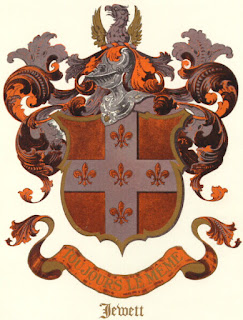 From an early age, I was interested in family history.  My maternal grandmother and I would spend countless hours poring over family photos, diaries, and genealogical charts recounting the story of the Jewett beginnings, at least as far as we could trace them back to the West Riding of Yorkshire in the reign of Henry VII in the fifteenth century. Thanks to efforts by the Jewett Family Association of America since the nineteenth century, the story of our family now fills four huge tomes of cross-referenced genealogical charts.  I always felt a certain amount of pride, as I flipped through these pages, that the motto on our family's coat of arms was toujours le même, (always the same), a rather common heraldic motto, but one that evoked stability, integrity, and timelessness.  And yet, the four volumes of my family's life bear witness to the fact that change occurs within this larger context of stability.  People grow up, get married, have kids, and die, one generation yields its place to the next.  Things are never really always the same.

I was reminded of this truth this weekend when I came home to Chicago for a little R & R and to concelebrate at a mass marking the fiftieth anniversary of the consecration of James Winchester Montgomery, ninth Bishop of Chicago, to the episcopate.  When I was last at the altar with Bishop Montgomery, it was as a seminarian serving low mass for him during a weekday morning.  Now I entered the Church of the Atonement as a fully vested priest and curate returning home with a different identity and role within the Church.  I spent two years at Atonement as seminarian, and people got used to knowing me in that capacity, so I was deeply moved when they treated me as the same person they had always known and loved.  Not that I thought folks would be standoffish or awkward, but we've all moved on with our lives, so I it would be natural for us to cease to relate as we once did.  But that's not what I experienced.  I may now be a priest, but in many ways I'm still the same Ethan.  I felt that I was welcomed on a deeper level than just as seminarian or transitional deacon or priest.  I was welcomed as Ethan.  And I welcomed them not as a congregation, but as dear sisters and brothers that I care deeply for and have missed.

What this conveyed to me is that one way relationships can change is through expansion.  Some relationships alter--and sometimes needfully--through disconnection and discontinuity, while others build upon a prior foundation and bring the past along into a new understanding of the people involved.  I am very happy to have moved on to a new parish and a new stage in my vocation, but it was very meaningful for me to vest in that familiar set of white chasubles in my home parish with the priests that nurtured and formed me during seminary.  To be accepted into their company as a peer was like closing a loop, a completion of one stage in my process of becoming.  To be welcomed by the congregation as a priest, and yet as the same Ethan, articulates one of the greatest strengths of this particular parish:  we remain the same at our core even as we evolve and expand into new iterations of ourselves.  I, in turn, was pleased to be able to offer these old friends something more, now as a priest: the Holy Sacrifice of the Mass for all, a first blessing for a brother priest, and an impromptu prayer and blessing for a friend.  This all came out of the same me in a new way.  As the rector, Fr. van Dooren, once said to me, we as priests need to develop a solid center, rather than a thicker skin.  This center ensures that whatever difficulties we face, we are always able to return that core of stability, integrity, and timelessness.  I hope all of us may be always the same, but in new ways.
Posted by Fr. Ethan Jewett at 9:41 AM