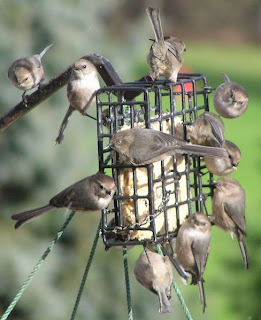 I have often been accused, with some justification, of being insufficiently observant.  One afternoon many years ago, a good friend and I were browsing at a shoe store in a suburban mall.  After wandering about for a while, my friend said to me as we were walking out, "I wonder what all those cops were doing in there?"  "What cops?" I replied.  And then, my friend, incredulous, pointed to the 3 or 4 obviously uniformed police officers in the store.  "Hmm," I said casually, as if it were the most mundane scene in the world.  How I could have failed to notice something so noteworthy in such a small space remains a mystery to me.  But this morning, I experienced the exact opposite.  I seemed to be noticing everything in the smallest detail.  I was hyper-observant.

As I was saying Morning Prayer, for example, I became aware that I found the Sabon font in which the Book of Common Prayer is printed especially comforting and reassuring.  Perhaps it's like seeing the face of an old friend whose personality, laugh, and company you've enjoyed for years and years.  One instinctively smiles when it comes into view.  And then, as I was walking to physical therapy, I zeroed in on the many insignificant details that have become familiar to me on this oft-traveled route.  The fluttering of little birds around the bird-feeder in the St. Clement's garden. The smell of cigarette smoke outside a hotel on Cherry Street.  The banging of a hammer at that new construction site.  A drooping flower etched in the facade of a building facing the Pennsylvania Academy of the Fine Arts.  The fetid billows of steam emerging from the manhole cover on 19th Street. The lines on the face of the man always hanging out in front of the Walgreens pharmacy asking for change.

Is any one of these things remarkable?  Probably not.  But I am cognizant that so much of life is a blur, and I am grateful for the moments--rare though they may be--when my senses seem to be heightened, and I am able to appreciate the richness of human experience.  Maybe there is something of the movement of the Holy Spirit in this, urging me to slow down and take in the details that form the substance of existence.  In Advent, we are encouraged to be reflective, contemplative, to attend to the basics of our faith and life, not just let them pass us by in one undifferentiated whirl of stimuli.  After a particularly over-scheduled week last week, I am relieved to have time to savor the details, the minutiae, and occasionally, the silence.  I am pretty certain, then, that one of my Advent lessons is to slow myself down, pause, and take life in--not only in my walking to appointments, running errands, and checking off the items on my task list, but also in my prayer life, by saying the daily office more slowly, meditating leisurely on each of the petitions in the Lord's Prayer, and calling to mind in prayer people I haven't thought about in ages.  The world will accelerate and thrust us along with it soon enough.  So, for now, my friends, slow down, pause, rest.