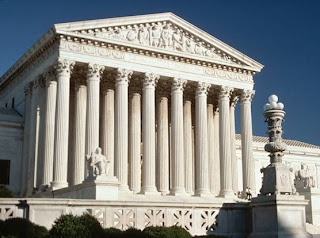 This morning I will renew my ordination vows at Philadelphia Episcopal Cathedral.  It is also the day that the U.S. Supreme Court will take up the constitutional issue of marriage equality for same-sex couples.  That these two events should be happening on the same day seems apropos to me, even synchronous.  They test and affirm the vows I have taken respectively as a Christian and an American citizen, which are not so different.  In the first instance, I promise to live and work as a priest: to respect the authority of my bishop, to study the Bible, to administer the sacraments, to be a faithful pastor, to pattern my life according to the teachings of Jesus Christ, and to persevere in prayer.  At the heart of this vow is faithfulness to the pursuit of justice and truth.  As an American, I have assented to the values of liberty and justice for all, just as we used to say during the Pledge of Allegiance in elementary school.  It is my hope that as the Justices review the constitutionality of same-sex marriage, they remember that justice is not a relativistic concept, that separate-but-equal continues to be an untenable position.

I am also mindful today that there are other vows that matter.   The 10-year anniversary of my relationship with Mike comes next week on his birthday, and I feel deeply the various vows we have taken together.  Mike promised at both my baptism and confirmation to support my life as a Christian, as I did when he was received by Bishop Persell from the Roman Catholic Church into the Episcopal Church.  And there were the vows to love, honor, and support each other that we took at our civil union in 2011 before both the judge and the priest.  But the vows that are perhaps the most urgent, the most binding, are the vows of baptism that commit each of us to a life that sees no hierarchy, no privilege, among people.  The Baptismal Covenant in the Book of Common Prayer bids us promise to seek and serve Christ in all persons, loving our neighbor as ourselves, and to strive for justice and peace among all people, and respect the dignity of every human being.  Holy Week serves as a reminder of these baptismal vows.  We have each of us been baptized into the death and resurrection of Jesus that we might live in a new way in a community that does not categorize people into worthy and unworthy, high and low, included and excluded.  Even in a country with no established church or religion, it is good that the ideals of Church and state should overlap, that justice and equity should prevail for all people without distinction.
Posted by Fr. Ethan Jewett at 8:14 AM