Father, we pray for your holy Catholic Church,
That we all may be one.
(Prayers of the People, Form III, Book of Common Prayer, p. 387) 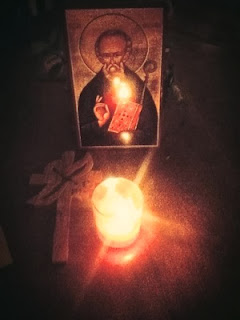 A couple of weeks ago, I witnessed a rather passionate exchange on a friend's Facebook page about the use of the term, "Catholic," among Episcopalians.  Whenever this topic comes up, folks spring into action with strong words, almost like an instinct, declaring their respective allegiances.  The debate feels more visceral, than reasoned, and this makes me curious.

I am certainly among those who argue that the Catholic wing of the Episcopal Church (and other Anglican churches) needs redemption from its long legacy of misogyny, homophobia, clericalism, and other sins.  It is true.  And there are still some who hold to the old litmus tests of Catholic orthodoxy that make many progressive Episcopalians bristle.  I even count a few of them among my friends and colleagues.  We disagree on certain key issues; yet we love and respect each other all the same. The last thing we would think of doing is mocking, hurting, or marginalizing each other.  Maybe a little gentle teasing, but it's rarely meant to be hurtful.  After all, we're dear brothers and sisters, not theological camps in a battle for domination.

Besides, the classic battle lines of Anglican Catholicism are largely relics (no pun intended) of a bygone age.  New generations of Episcopalians are embracing "Catholic" in ways that break with traditional understandings of what that word used to mean in Anglican circles. Arguments about women's ordination have given way to groups that recite the rosary or the Daily Office together, book clubs that read Julian of Norwich or Thomas Merton, and college graduates that join young adult service corps or volunteer for disaster relief efforts.  In the past, "Catholic" often served as a one-word manifesto, a line in the sand, that said, "we are not like you."  But that was then; and this is now. 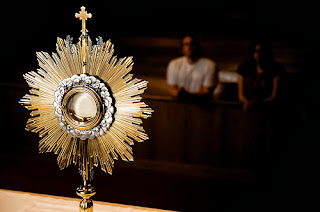 "Catholic" need not be a line in the sand that divides "us" from "them."  "Catholic" at its best should be an affirmation, a statement that we are a community of Christians who root an important part of our identity in the Church's catholicity.  Sure, some of us may engage in traditional Catholic practices, such as Eucharistic adoration, Marian devotion, or praying the rosary, which distinguish us from Episcopalians who do not practice them, but it's deeper than that.  Catholic identity attempts to bear witness to the Church's universality by adopting a shared lifestyle of sacrament, spirituality, and service.  See one example of this here. 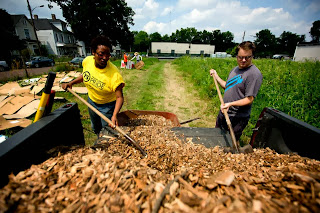 In this way, many people who don't even identify as "Catholic" are proclaiming the Church's catholicity, and I find this wonderful.  It means that whatever labels we use, each of us is a living part of the universal Church, however much we may undermine its unity at times.  When we commit to a disciplined life of prayer in the recitation of the Daily Office, seek a deep groundedness in our relationship with Jesus through Scripture and Sacrament, work for the improvement of self through spiritual direction and reconciliation, and promote the betterment of society through social justice and community service, we are invoking the four marks of the Church: one, holy, catholic and apostolic.  "Catholic," moreover, brings into our awareness our connection with previous and future generations of the faithful, of martyrs and mystics, of saints and ordinary sinners.  It reminds us that we are all called to be one in emulation of the One God who created us, the One God who redeemed us, and the One God that sanctifies us.

So, if we are all part of the One, Holy, Catholic and Apostolic Church, what's the problem? "Catholic" is clearly a loaded term for some, filled with much woundedness, but with much life-giving holiness, too.  "Catholic" should not be a flash point, dirty word, or epithet, any more than Protestant, Reformed, evangelical, or any other ecclesiastical label.  And nobody is imposing the term on any one who resists claiming it.  So, I would commend generosity and gentleness in conversations where "Catholic" makes an appearance.  To quote the familiar Anglican formula: "all may, some should, none must."  In the end, I would like us to recover "Catholic" from its bad rap, to restore it to its original meaning of universality, so that it may unite, rather than divide.  Strife, discord, and oppression have taken "Catholic" away from us Anglicans, and I want it back.