Rivers in the Desert

"I am about to do a new thing;
now it springs forth, do you not perceive it?
I will make a way in the wilderness
and rivers in the desert."
Isaiah 43:19 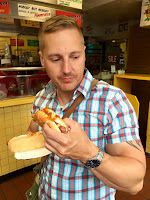 I spent this past Fourth of July weekend in New York City playing the tourist, scarfing dollar pizza and Papaya King hot dogs on the run, and visiting a number of sites I hadn't seen before.  Among these were two magnificent structures, the Cathedral of St. John the Divine and One World Trade Center. These buildings struck me as signs of the almost inexhaustible human aspiration for rebirth and renewal.  As the quote above from the prophet Isaiah suggests, God inspires human beings with a drive to turn a barren desert into an abundant land flowing with milk and honey.  This is God's work, and we participate in it.

Among the largest cathedrals in the world, St.John the Divine is wedged into an already cramped piece of Manhattan.  In fact, new condo construction hugs the cathedral's north tower, presenting a jarring juxtaposition of Gothic and contemporary styles.  If the cathedral were a person, it would have very little elbow room, rather like the packed NYC subway. Yet unlike that other great Episcopal monument, Washington National Cathedral, you can't rely on distance to take in the cathedral's full effect.  You can't keep walking back and back and back to capture the whole edifice in one click of your camera.  There's simply no room.  You must satisfy yourself with taking it in, a piece at a time, which is all the more extraordinary, since the building has remained conspicuously unfinished.  But despite its unfinished status, and its heavily soiled facade, the interior is lustrous and peaceful.  As I walked through it, I perused an exhibition in honor of the Dalai Lama, sat in on a lunchtime mass in a side chapel, and marveled at the number of people at prayer.

At another point in the trip, I visited One World Trade Center, which had recently opened its observation deck.  It offers an impressive 360-degree panorama of the city.  Most compelling, however, was the view directly down the side of the building.  From the staggeringly high elevation, one cannot help but be awed by the footprint of the absent twin towers. From the top of the new edifice, it looks like a scarred landscape, two stark holes in the earth where the World Trade Center used to be. Back on the ground, however, these holes are transformed into something simple and beautiful, hardly barren or scarred. Two fountains with gushing water draw you in, as if to say, "there is still life here," even as you stand reading the names of the dead encircling the monument.  A new thing has definitely sprung forth, a way in the wilderness, a river in the desert.

Both of these places serve to ground people in the best attributes of human nature: strength, resilience, hope, peace.  They pull us out of a frenetic world and remind us to pray--whether we're religious or not--for deliverance from sin, suffering and death, and to seek a future of abundant life.