All Souls' Day: A Storehouse of Consolation

A Sermon for All Souls' Day.  A link to the audio recording can be found here. 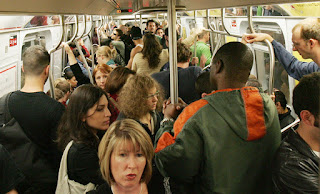 A young man sat across from me last Tuesday on the Red Line train during the evening rush hour. We’ll call him Phil.  Phil was in his mid- to late-20s, with a shaggy ginger beard and huge headphones over his ears. He looked up at me every now and then, and after several stops, finally leaned forward and ventured tentatively:

“I am,” I stated pithily, smiling.

“Those are fine. Or you can just call me Ethan.”

“I’m not a Catholic or anything, Father, but …”

“Neither am I, actually. I am a priest in the Episcopal Church,” I hastened to clarify.  (I decided not to muddy the waters by explaining Anglo-Catholicism. I knew what he meant.)  Phil’s face brightened with a look of recognition.

“The Episcopal Church. OK, so you don’t have confession, then?”

“Actually, we do,” I said encouragingly.  “But we often call it reconciliation.”

“Hmm. Really?  Well, do you think that the sins and bad stuff we do can affect our physical health? ‘Cause I’ve been feeling kind of sick, lately,” Phil confided. “I’m wondering if there’s a spiritual cause for it?”

“Absolutely,” I agreed.  “I firmly believe that the things that weigh on our consciences can affect our whole selves, emotionally, spiritually, and physically.” Phil seemed genuinely engaged, so I continued. “They damage our souls, and they can turn toxic and work on us over the long haul, if we don’t process them through therapy or sacramental confession.  In fact, I do both, and I highly recommend them.  They can make a huge difference.” Phil’s face, which had been intensely serious, relaxed into a smile.

“OK, thanks,” he said reflectively, as we shook hands and I got off the train.

To those who say that sin is an outmoded, medieval concept, my brief conversation with Phil would suggest, on the contrary, the world is still in desperate need of God’s mercy.  And that’s because sin is real, however much our society might deny its existence.  Sin is a difficult sell these days, because we would prefer to focus on God’s estimation of the created order, including us, as very good, as the book of Genesis records.  But the recognition of human sinfulness does not invalidate God’s original blessing.  Rather, it acknowledges our complexity: that the human experience is fraught with moral failings that we cannot resolve by ourselves.  We may be inherently good, but we are not sufficient unto ourselves.  We need God. 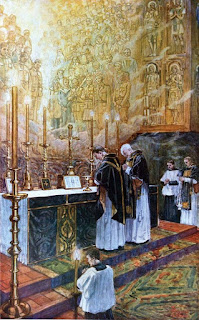 It may be hard for us to discern this hopeful message in the Requiem’s severe language. Contemporary sensibilities are not attuned to the Requiem’s central theme of the wrath and vengeance of divine judgment.  But to really appreciate the extravagant gift of God’s mercy and deliverance from sin, we need to engage equally extravagant language around human brokenness.  If the human condition were expressed in lukewarm terms, then God’s remedy would seem far less dramatic, far less redemptive.  What is deeply beautiful about the Requiem liturgy is the notion that however far we may fall, however much we might deserve divine retribution, God, out of his endless love for us, offers us abundant mercy.  And this is where the liturgy ends up, with the balm of divine absolution.

This evening’s readings are aligned to this hopeful outlook.  They are meant to provide reassurance in the face of fear and despair, doubt and failure.  The Dies irae expresses the intensity of human terror in the face of death and final judgment, and, yet in the Recordare there is a note of humility and tenderness that acknowledges God’s promise of redemption through Jesus’s once-for-all sacrifice on the Cross.  “Remember, kind Jesus, / my salvation caused your suffering; / do not forsake me on that day. / Faint and weary you have sought me, / redeemed me, suffering on the cross; / may such great effort not be in vain.”

A wise priest said to me one day, while instructing me how to hear confessions, “Remember that we come to confession, not for condemnation, but for forgiveness.”  In the face of deserved judgment, God offers forgiveness to those who seek it out in a spirit of sincere repentance.  It is a pity that so few people nowadays avail themselves of the sacrament of confession, because I think it would provide a baseline for understanding how the Requiem amplifies on a cosmic scale the assurance of God’s mercy the priest offers the penitent in life.  In death, too, we are assured of mercy.  We may be broken, but God intervenes to make us whole.  And we are insufficient unto ourselves, not only because we must rely on God, but also because we must rely on each other.  That is what it means to be the Body of Christ and to participate in the great cloud of witness we call the Communion of Saints, which we celebrated yesterday.

The Communion of Saints, however, is often practiced as a one-way street, rather than the mutual relationship of intercession and encouragement that it is.  Yesterday, as we recited or sung the Litany of the Saints, we asked the holy ones who have gone before us for their intercession as we face the strife of our lives here on earth.  Yet, the saints are not just charged with the ministry of conveying our repentance to God, and pleading on our behalf.  They are also sinners with their own brokenness and pain, seeking wholeness and ultimate union with God, for whom we pray.  One theological tradition of the Church has argued that whatever brokenness we have acquired through sin during our lives on earth, we must face it after death in a reality that precedes Heaven.  I have imagined this myself not so much as working off our sins, but God granting us the space to repair the damage to our souls through healing, and learning, and new spiritual insight, so that we may achieve a more intimate union with Him.  In the end, who knows?  What is fairly certain is that we each meet our Maker with a certain amount of woundedness.  So, the living in turn pray for the departed on All Souls’ Day, asking God to show them mercy and heal their brokenness.  The Communion of Saints is about solidarity in the midst of shared sinfulness and vulnerability and hope.

The great luminary of the Oxford Movement, John Mason Neale, offered the following guidance in his sermon on All Souls’ Day 1856 to the sisters of the Society of Saint Margaret, of whom he was the founder and first chaplain.  He said,


“But for the great multitude of those who have been redeemed to God … they without us shall not be made perfect.  And it is they, the true Servants of God, but not his Saints, whom we keep in memory to-day.  And what then?  Between them and us is there no fellowship?  Is there such a great gulf fixed, that no prayers, no power or grace of the Church can overleap it?  God forbid!  This it is to hold the Catholic faith; this it is to derive the untold comforts of her storehouse of consolation.  Think now each of you, of the dear ones whom you have lost, and believe this earnestly: that, if they have slept in the Lord, your prayers still avail for them, as much as (or more than) if they were still present in the flesh.  Let it be so, that we cannot tell what their needs are; that we know not what especial increase of grace they lack; in what particular way they desire to be helped.”

The saints, whom Neale calls simply servants, to remind us of our kinship with them, are bonded to us in common care and prayer across the ages. We share in the untold comforts of the Church’s storehouse of consolation in prayer, the sacraments, and our relationships with each other, the living and the departed. 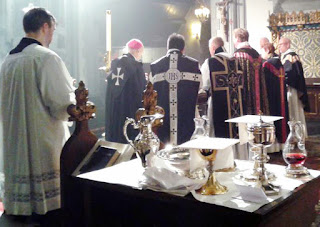 In fact, the prayers of the living and the dead for each other across the ages drives the Church’s core identity as one, holy, catholic and apostolic.  From the apostles, martyrs and confessors of the primitive Church down to Phil, and you and me in this day, we are united in God’s promise of mercy and new life.  “Very truly, I tell you,” Jesus proclaims in the Gospel of John, “anyone who hears my word and believes him who sent me has eternal life, and does not come under judgment, but has passed from death to life.”  The Eucharist that we are about to celebrate is our regular affirmation of this promise of eternal life, when human brokenness is redeemed, ours and the servants who have gone before us.  Bread broken that, in the fullness of God’s time, we might be whole.

Rest eternal grant unto them, O Lord.  And let light perpetual shine upon them.
May they rest in peace.  Amen.