A Voice is Heard in Orlando 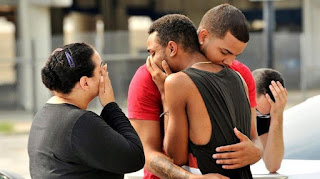 Thus says the Lord: A voice is heard in Ramah, lamentation and bitter weeping. Rachel is weeping for her children; she refuses to be comforted for her children, because they are no more. - Jeremiah 31:15

When the news hit me of the mass shooting in Orlando, I was stricken by a sense of powerlessness in the face of so much violence and grief. It is hard to know how to respond to trauma on this scale without feeling that what we do is an empty gesture. One acquaintance of mine rawly declared that "thoughts and prayers" are a trite and perfunctory response to tragedy. "My prayers are with you in this terrible moment," is the sort of thing people feel socially obligated to say. After hearing it so many times, the words, however sincere they may be, lose their impact for the grieving. After all, people are devastated and terrified; they need something more concrete and actionable than a formulaic expression of solidarity.

I struggled with this. There was a very big part of me that resonated with my friend's sobering challenge. Are my thoughts and prayers just an easy, phone-it-in response that doesn't ask much of me? It doesn't inconvenience me, or make me go out of my way. It doesn't force me to change the pattern of my daily routine. It costs me nothing. I realized, though, that prayer--as unsatisfying as it may be for some people--is the foundational Christian response to everything in life, including tragedy. Our main job as Christians IS to pray. The whole pattern of our faith is grounded in prayer: the Daily Office, the Eucharist on Sunday, anointing, marrying, burying. It is all prayer. We pray for God's presence and activity among us in all of the moments of our existence; we call upon God's power to transform us when our own resources fail us. 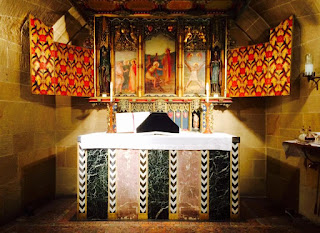 As I walked into the cathedral to say Mass yesterday, I thought carefully about how the Church could be useful to the grieving. "OK," I thought, "let's own the grief and anger and pain and fear. That's where people are. The Burial Rite from the Prayer Book. Black vestments. The readings appointed for the Feast of the Holy Innocents." So, we did what the Church does in these moments: we prayed--hard. Praying isn't a passive act. Praying activates us to bear the Gospel into the world, to respond to the rhetoric of violence and death, of hate and despair with Jesus' message of love and healing and new life. Praying, both publicly and privately, is the act of drowning out the messages that destroy with the Good News that builds up. That's one reason we pray without ceasing. We keep preaching the Gospel over and over again, because the world desperately needs to hear it. The Evil One is a liar, don't you dare believe him.

Perhaps some of us pray the familiar words so often that we forget what we're calling upon. In morning prayer, for example, the collects reach out to God for peace and protection: "O God, the author of peace and lover of concord, to know you is eternal life and to serve you is perfect freedom: Defend us your humble servants, in all assaults of our enemies; that we surely trusting in your defense, many not fear the power of any adversaries; through the might of Jesus Christ our Lord. Amen." In the aftermath of a tragedy like Orlando, these words take on renewed meaning and power. They are relevant; they matter. Engaging the biblical stories of Rachel weeping for her children--the tribes of Israel that were gathered for deportation to exile in Babylon--and the slaughter of the Holy Innocents by King Herod enfold our current tragedies within the larger story of God's action and salvation. There is kinship between then and now, between Ramah and Orlando, between the babies martyred by Herod, and those martyred by Omar Mateen. But these stories are also linked to the assurance in the Revelation to John that "death will be no more; mourning and crying and pain will be no more, for the first things have passed away." God urges us to respond to tragedy by working to bring this New Jerusalem into being with our hands, and our feet, and our lips in prayer.

We were a small congregation in the cathedral chapel, but the sincerity of the prayer was palpable. There was no doubt in my mind or my heart that we were doing something meaningful and healing. After the requiem was over and the chapel emptied, two men entered to sit quietly and pray. One shared that he was having a lot of trouble with his grief over the Orlando shooting, and the other that he was angry and discouraged over a recent disappointment in his life. I laid hands on both and prayed with them, and I suggested to one that he read psalm 35--a source of great comfort to me when I felt I was being badly treated. The look of profound gratitude and comfort on both of their faces was very moving, and I was reminded that praying is the action the Church does best. Prayer is the center from which we become agents of God's healing, whether in activism, interfaith collaboration, liturgy, or the pastoral care of each other. May the Church never lose sight of its power to offer the suffering the gift of new life.