Why I Protested and Where We Go From Here 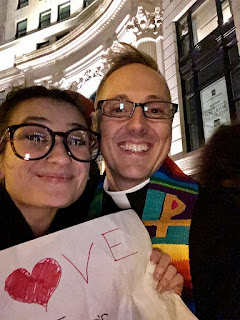 My dear sisters and brothers,

I could call this entry, "Winners and Losers, Part II," since I know that people across the country feel that they fall into one of these two camps in the wake of a nasty and polarizing election. As I noted in my last post, I rarely express political opinions on social media or in the pulpit. In general, I try to be non-partisan, so that I can more easily be a pastor to all people, irrespective of their political views. I don't want to be a source of division within whatever parish I serve. Yet over the last couple of days, extraordinary circumstances have forced me to revisit and revise that position for the time being.

The reason I joined thousands of other people last night in my clerical collar and rainbow stole to protest and march was not because the Democrats lost and the Republicans won. After all, I spent eight years doing public policy quite effectively with the two Republican administrations of George W. Bush. I am quite used to and supportive of working--and often disagreeing--across disparate viewpoints. This disagreement can be a healthy check on my own narcissism, hubris, and self-righteousness. Partisanship is not what this is about. 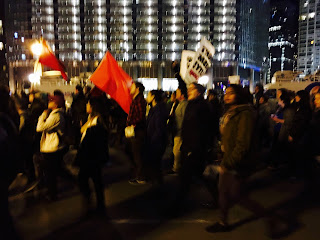 We have not seen this degree of demagogic discourse in the public square for decades, and I believe it is the Church's responsibility to serve as a moral voice to oppose and correct these profoundly dehumanizing words and actions. To those people, who caution that we need to give Mr. Trump some breathing room to demonstrate how he will govern now that he is elected, I say this: Mr. Trump already has much to answer for, and there is nothing in his past behavior that would incline me to give him the benefit of the doubt. Quite the opposite. A relationship between President and people is based on trust; and frankly, I don't trust him. He's given me no reason to trust him. Just because Mr. Trump was a candidate until now doesn't mean that he is not accountable for what he said and did during the campaign. It is because he is now a position to make good on his threats to build a wall, or deport refugees, or rescind marriage equality, that we must gird our loins to resist those boasts and let him know we are being vigilant. These threats may no longer be hot air. They may become real very soon. 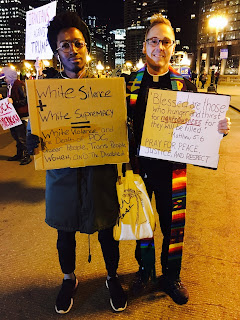 As I walked off the El last night toward the protest with my sign in hand and my stole over my shoulders, I made eye contact with a white, middle-aged woman, who became quite tearful and emotional when she saw my sign, which said, "Blessed are those who hunger and thirst for righteousness, for they will be filled. - Matthew 5:6  PRAY FOR PEACE, JUSTICE, AND RESPECT." She nodded toward me and thanked me for being visible and present. I patted her arm and comforted her as best I could. I arrived at the protest in front of Trump International, where we shouted for about an hour, and then processed peacefully down State Street, gathering new marchers from curious onlookers as we passed. Of course, there was anger, mocking, and profanity; and I didn't agree with every message that was voiced. I'm not looking for revolution. I'm not seeking to dismantle the "system". I don't think shouting vulgarities helps the cause for peace and reconciliation. I hoped that my presence and that of Holy Scripture would offer an alternative to more extreme, vindictive messages. In any event, I did affirm the right of all of us to gather and participate in our democracy by peacefully protesting. That's why I was there. We continued all the way down the Magnificent Mile; and as the march turned from Michigan Avenue to Upper Wacker, I noticed a Muslim woman, her head wrapped in a scarf, quietly weeping, clearly moved by the show of solidarity. People were sticking up for her, and it mattered. Later, as I stood on the sidewalk on Wabash Street, a young millennial ran by, and then when he saw my sign, he stopped suddenly, and shouted out, "God bless you, Father, for being here and supporting us. Really, God bless you." 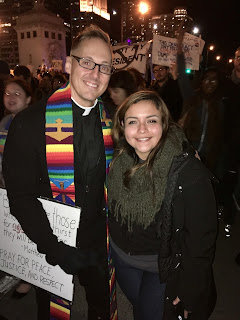 As a priest, there were some opportunities for me to offer pastoral care; and there was actually some healing in all of this. Many young people cautiously asked what church and denomination I represented. We talked about religion and Christianity. I was offered hugs. I was asked to take selfies. A student reporter interviewed me for the school paper. A young woman said cheerfully that she liked my stole. Countless people stopped to read my sign--some obviously, but many surreptitiously out of the corner of their eyes as they passed me. I saw the message register on their faces. Many even read the words from Matthew's Gospel, smiled, and nodded. Finally, after three hours, my back was killing me, so I called it an evening and made my way to the El station at Lake and State, still carrying my sign. Several homeless men stopped me to talk and asked me to pray, and I asked them to do the same. When I boarded the El train, three millennials who had been at the protest--an Asian man, a black man, and a white woman--drew me into their conversation. We debated and shared our experiences. I commended them for their commitment and encouraged them to continue to take their civil responsibilities and our democracy seriously.

That leads me to what I believe the Church and all concerned people need to do next. Be a moral force. Speak out against hate and violence. Seek reconciliation and unity, while respecting diversity. Write letters to your legislators. Vote on election day. March and protest if you have to. I have never really identified as a radical or an activist; but I do identify as a committed Christian. I believe in the words of the prophet, Micah (the message on the other side of my sign): "He has told you, O mortal, what is good; and what does the Lord require of you but to do justice, and to love kindness, and to walk humbly with your God." There is so much fear and distress that the Church needs to offer protection and solidarity to those who stand to lose much, including their liberty, maybe even their lives. Those like me who respect the democratic process, including the peaceful transition of power and the will of the electorate, are still bidden to admonish our government when it threatens to violate the principles on which we are built. Donald Trump will be our next President, and the best way to help him and our nation to succeed is to assume some moral responsibility for shaping the next four years.

May God bless you all.