This Sunday, We Wear Pink! 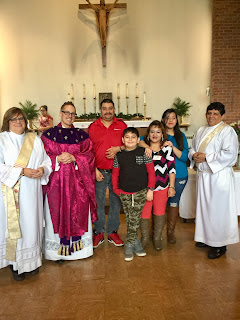 Recently, I was re-watching the 2004 teen comedy, Mean Girls, in which a previously home-schooled teenager raised in Africa, Cady Heron, attends a public school for the first time. On her second day of school, Cady is befriended by a group of popular girls known as "the Plastics," who introduce her to the highly nuanced pecking order of high school and the rules of the in-crowd. One of the Plastics, Karen Smith, tells her, "on Wednesdays, we wear pink!" I laughed and remarked that we in the church have a similar set of rules. Twice a year we wear pink or rather--in the language of the Church--"rose" vestments, to signify that we are taking a much-needed break from the austerity and penitence of Advent and Lent.

Advent 3 is called "Gaudete Sunday," and Lent 4 is called "Laetare Sunday," both roughly translating as "rejoice." These Sundays are meant to remind us that even in the midst of temptation, sin, and death, there is a reason for joy, because God is with us in those moments. This Sunday will be special for me personally, because I will be presenting a gift to the parish, a new red cope, in memory of my grandmother, who died three years ago at this time. The cope will be used for the first time on Palm Sunday, when the church again changes colors, from the violet of Lent to the red of our Lord's Passion. Even in the midst of darkness, it is important to remember the light. In response to temptation, God offers us strength. In response to sin, God offers us redemption. In response to death, God offers us life. And that's a reason to pause and rejoice. So, on Sunday, we'll wear pink.