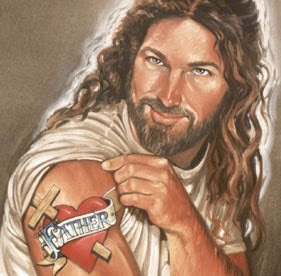 This past Sunday, the Guardian newspaper came out with an article entitled, "A very muscular brand of Christianity: Why Jesus has undergone a macho makeover." I thank my friend, Ron Emrich, for passing this item on to me, because as a self-professed gym rat, I have always struggled with the notion of a pure and sanitized Jesus, stripped of every hint of grit, edge, and masculine hardness. So, to imagine Jesus as a buff biker dude with tattooed guns restores a certain authenticity in my mind to the Word made flesh. If Jesus were to appear among us today, he might very well look quite unlike some of the traditional depictions of the Savior that we are used to: the doe-eyed, airbrushed Good Shepherd of our illustrated Bibles, or the icon vested in the magnificent robes of Christ the King or Jesus Christ the Great High Priest. The graphic and unsettling embodiedness of the crucified Jesus is suggested in artist Stephen Sawyer's evocative images, such as the one above. This is not to say that I have any problem with the traditional images of Jesus; in fact, I cherish them, and the walls of my study are adorned with Orthodox icons of Christ Pantokrator, Christ the Great High Priest, and the Madonna and Child. 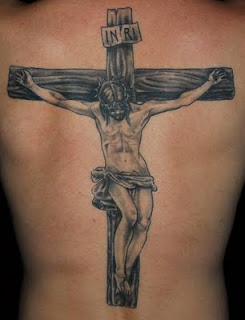 But above my computer for many years has hung a picture of a man's back tattoo of the Crucifixion. This picture has served as a reminder that the the Christian faith would not be what it is without the raw, enfleshed suffering of the Crucifixion by which humanity was saved from sin and restored to right relationship with God. I was deeply moved when I first saw this picture, for I perceived that to carve an image of this event in one's own flesh is to share in the suffering of Jesus' own passion. It is to proclaim Christ crucified, died, and risen. As one who has endured the intense pain of the tattooing process several times, I can tell you without any hint of melodrama that I have never experienced so poignantly or personally the physical suffering of Christ as when I'm getting inked. In fact, the pain was so blinding during my first tattoo that I spent the two-and-a-half hours in the chair reciting the Sorrowful Mysteries of the Rosary through clenched teeth. Later on, I also discovered a certain resonance between this experience and the Shewings of the medieval mystic, Blessed Julian of Norwich, who described in rather gory detail her sharing of our Lord's physical and spiritual suffering through a series of visions. Julian's accounts seem gratuitously bloody and even pathologically masochistic to modern sensibilities, but there is something in them that truthfully expresses the depth of the connection between Our Lord's passion and human suffering. Suffering and sacrifice is a raw truth of human existence. 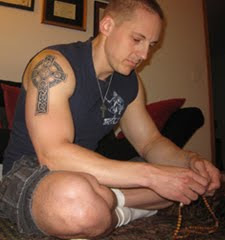 To be sure, I did not get ink because I relish suffering, but because I wanted some way to publicly and indelibly declare my commitment to becoming a priest, so I got a Celtic cross on my right arm when the bishop made me a postulant and a dove of the Holy Spirit on my left arm when I entered seminary. As a believer in the sacrificial nature of the priesthood, I never wanted to forget that my vocation was supposed to cost me something, that the priesthood was a difficult life and identity to take upon oneself. As odd as it may sound, the painful process of the inking had something sacramental about it, making the sacrificial commitment truly enfleshed, not just abstract. The pain-memory of the tattooing has followed me as a reminder of my commitment throughout the formation process in seminary, during the search for a call, in the radical reordering of my life. I know that, especially for some of my traditionalist friends, the idea of having a tattooed priest, may lead you out of your comfort zone, and that's OK.

But if the Catholic understanding of priesthood is true, as I believe it is, that at ordination the priest becomes an alter Christus, another Christ, then we may need to expand our understanding of what a priest looks and acts like. Instead of only being icons of airbrushed holiness, priests (and I would argue all the baptized) should also embrace the grittier and more embodied dimensions of our personhood that may not cohere with a narrow vision of pure and sanitized sanctity in a cassock and chasuble. I am not suggesting replacing one image or persona for another, but rather the healthy and authentic integration of identities that honors the fullness of who we are and who Christ was and is. I have so admired friends and colleagues that have modeled for me the authentic both/and approach over the traditional either/or paradigm. They are both gay AND Christian, priest AND marathon runner, traditional AND progressive, morally holy AND prophetically embodied. For us to be an alter Christus is to honor both Christ the Great High Priest and the biker dude with the tats. The Gospels very clearly illustrate the many ways Jesus rubbed against the grain of the respectable establishment and power structures of his day by challenging social norms and consorting with the disreputable biker dudes and edgy folks on the margins. So, personally, I dig this new Jesus with the tats. I think Sawyer got something right, but I still like my Orthodox icons and my cassock.