The Public Role of Religion after 9/11 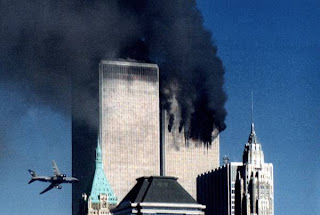 The press this week has been abuzz regarding the role of religion in the public sector, and evangelicals in particular have been perturbed for being left out of some of the events marking the ten-year anniversary of the 9/11 attacks.  New York Mayor, Michael Bloomberg, for example, has been accused of treating the United States as if it were a secular state, and Washington National Cathedral was criticized for having no evangelicals scheduled to speak before the venue was moved to the Washington Hebrew Congregation.  I am not here to contradict or to endorse evangelical claims on this issue, but merely to indicate that this event has underscored Americans' fundamental uncertainty about the role that religion is supposed to play in public life.  During the heyday of American Christianity in the 1950s and 1960s, no one would have contested how religious institutions were supposed to engage in the public sphere.  They were unapologetically front and center. 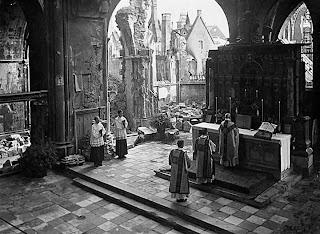 Evangelicals are certainly correct that the United States has become increasingly secularized, especially when compared to the 1950s.  The current pluralist ethos, moreover, has broken the monopoly that mainline Protestantism had enjoyed for so long, even though evangelical Protestants have worked hard to fill the void and can claim some noteworthy successes in the 1980s and thereafter.  The critical question this leaves us with is:  What do churches have to offer a grieving nation that nobody else can provide? Religion's loss of prominence in the public sphere means that our churches have to earn what was once taken for granted as an entitlement. I must thank Fr. Dave Hedges for pointing me to the photograph at right of a solemn high mass among the urban rubble of World War II.  It poignantly declares the need for the Church to be present as a locus of stability and strength in the midst of chaos and destruction.  The altar in the image stands as a sign of Christ's victory over death, of his affirmation of peace over war.  This is a message that still has resonance within American society, even in its most secularized incarnation.  The flood of people that sought refuge in our churches during the harrowing trauma and carnage of 9/11 proves that religion still functions as it always has in life's most critical moments.  May we envision this anniversary of our national tragedy as an opportunity to do what religion does best, to offer a place of stability and strength where grieving people can encounter the hope and promise of Christ's resurrection.
Posted by Fr. Ethan Jewett at 8:25 PM