Struggling with Traditional Language in Postmodernity 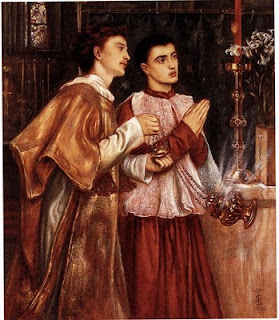 Recently at a seminarians' retreat, a colleague asked me how I could stomach the traditional language of thees and thous in worship and private prayer, what in the Episcopal Church we call Rite I.  She was respectful, but challenging, both from the perspective of Elizabethan English's relevance to contemporary spirituality and to its sometimes outmoded or objectionable theological and anthropological content.  No one talks like that anymore, and surely words like "heathen" and "Gentiles", which she had encountered in the historic Coverdale Psalter, perpetuate an othering that is demeaning and highly offensive.  I saw her point, and even sympathized.  In fact, I come from and currently serve in parishes that use contemporary English for everything, except perhaps for the Lord's Prayer, so that when I began to say my Daily Office using the traditional language of the Anglican Breviary, I had not only to adjust to a plethora of words ending in -eth that still tend to make me tongue-tied, but also to engage content, including exclusively male language for God, that chafed against my inclusive and liberative ethos.

So, how do I defend the use of traditional language in this day and age?  Well, first of all, as I said to my seminarian friend, every kind of language has its strengths and its limitations.  It depends on what we privilege.  For example, I grew up in a synagogue that belonged to the Conservative branch of Judaism, in which worship was conducted almost entirely, except for the sermon, in biblical Hebrew, rather than in the English vernacular of the worshippers.  Because my synagogue had a very strong connection to tradition, using the tongue of their ancestors--which is different from modern Hebrew--reinforced the worshippers' sense of rootedness in the eretz Yisrael, the land of Israel, and their spiritual, ethnic, and linguistic kinship with the patriarchs, matriarchs, prophets, and other figures of the Hebrew Bible. So, biblical Hebrew served as a mark of continuity with the identity of their forebears, and among a people that has repeatedly suffered exile, diaspora, pogroms, and refugee status, fostering continuity among generations is a critical religious priority.  Language is only one tool among many in this effort.  But this Hebrew is not the modern language spoken in Israel; it is a purely liturgical language, just as ecclesiastical Latin is within the Roman Catholic Church, among other contemporary examples.  I would contend that Elizabethan English, like these languages, is set aside for a special, distinctive purpose and is distinguished by its function from the everyday language we use for everything else.  It connects us to our earlier Anglican roots, allowing us to affirm continuity with the generations of English-speaking Christians who came before us.

But even this contention, that we use our vernacular uniformly for everything else, is spurious.  When I was studying French at the University of Caen in France, we Americans were especially targeted for our failure to recognize what the French call niveaux and registres de langue, levels and registers of language, which are strictly enforced in French society and its educational institutions.  Sparing you the exhaustive detail, common French is divided into intellectual, middle, and popular levels, each of which can be adjusted according to the situation, as the figure at the right illustrates, into familiar, very familiar, and vulgar on one side, and polished and very polished on the other. My basic point here is that the kind of vocabulary, sentence structure, and other linguistic patterns we employ vary depending on the context and setting.  Writing, in general, tends to be more formal than speaking.  With our friends, we use a great deal of slang that we would never think of employing at work.  In academic and professional settings, many people use technical jargon specific to their disciplines that would be out of place in ordinary conversation.  Newspapers and journalists limit to varying degrees (think of the difference between People magazine and the New York Times) the educational level of the language they use in order to be accessible to a wide reading public. So, even what we describe as "contemporary English" is not uniform. 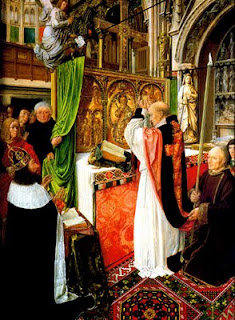 Now, of course, all this techno-babble does not provide adequate justification for language that people experience at oppressive or offensive.   It is simply meant to demonstrate that language is extremely diverse and fluid, even among forms we think of as fixed.  When I encounter a word like "heathen", for example, in the Coverdale Psalter, I consciously remind myself of the context (historical period, place, cultural outlook and attitudes, social context, etc.) in which the translation was rendered and look upon it as a dated interpretation that I take into account as I recite the verses.  In some instances, I cut the language some slack and recognize it for what it is: a limitation.  In others, I replace the word with a more palatable translation, such as "peoples" or "nations", which I regard as a more faithful translation within my own historical context.  Since language is adaptable to context, I do not feel bound, particularly in private devotions, to accept everything as is or to let it get in the way.  Above all, I try to remain focused on what a particular language makes possible theologically and spiritually.  Unlike the New Revised Standard Version translation, the Coverdale Psalter may indeed contain some objectionable language, but it is also sublimely poetic and lyrical, evocative of a particular time and place in our history as Anglican Christians, and allows us to affirm a connection to our roots that really reinforces the communion of the saints, the great cloud of witnesses that came before us and join their ongoing prayers with ours in the great liturgy of Heaven.