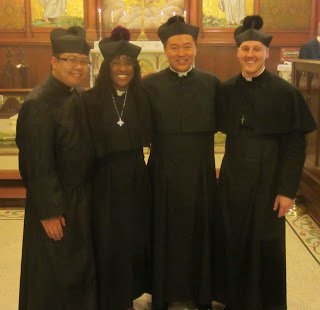 Last week, I spent four days at the Society of Catholic Priests' annual meeting in Detroit, during which we explored the future of Anglo-Catholicism in the Episcopal Church and the Anglican Church of Canada.  We attended educational workshops, prayed the daily office together, celebrated mass, and engaged in joyful fellowship and collegiality.  But mostly we shared with each other what it meant for us to be Anglo-Catholics, and from these conversations, it became clear that Anglo-Catholicism is a diverse movement that embraces a wide range of local contexts, cultures, and concerns.  I was delighted by this rich variety, as well as by the markers of our faith that we held in common.

At one point during a discussion, a seasoned priest playfully invoked a well-known list of attributes of Anglo-Catholicism, all of them beginning with the letter 'M'.  My friends and I then had a good deal of fun brainstorming to expand the list and reflect seriously on what it means to be an Anglo-Catholic, both historically and in the twenty-first century.  The following 10 markers is hardly a definitive or rigid description of Anglo-Catholic identity, but it's a starting point, and I encourage others to add to it. I should also offer the caveat that some of these may not be limited to Anglo-Catholic piety and practice, but may indeed apply to other congregations and sensibilities. 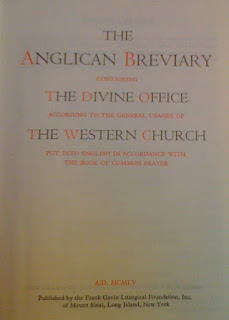 1. Matins- The Daily (or Divine) Office provides the anchoring rhythm of the Anglo-Catholic prayer life, whether it is practiced according to the Book of Common Prayer, the Anglican Breviary, the Roman Catholic Liturgy of the Hours, or another devotional book.  Morning Prayer was formerly known among Anglican Catholics as Matins, which is the earliest morning office in communities that still practice the old monastic offices.  I myself adhere to the daily offices of the Anglican Breviary, saying Lauds, Sext, Vespers, and Compline, supplemented by the Angelus and the Rosary.
2. Mary - The devotion to Our Lady recognizes the pivotal and unique role the mother of Jesus played in God's plan of salvation for humanity.  The Angelus and the Rosary are a concrete recognition of the primacy of the Mother of God among the saints who intercede for us with the Father, our Creator.
3. Mass - The mass is the central act of worship in which we continually plead the sacrifice of Christ, who offered himself as both priest and victim, on our behalf to the Father.  In the mass, we also offer a sacrifice of praise and thanksgiving for our redemption, that renewed through the Body and Blood of Christ, we are sent bearing God's healing and love into a broken world. 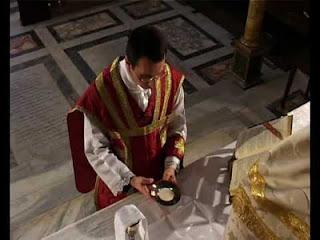 4. Monstrance - Eucharistic adoration, particularly Benediction of the Blessed Sacrament, has long been associated with Anglo-Catholic devotion as a recognition that Jesus is truly present to us in the Sacrament of the altar.  It is a response of gratitude to the extravagant generosity and selflessness of Jesus.
5. Maniple - Lest we forget, the Oxford Movement that brought about a Catholic revival of Anglicanism in the nineteenth century ultimately restored many of the outward signs of the Catholic sacramental life, including eucharistic vestments, such as the chasuble and maniple, a short strip of cloth worn on the celebrating priest's left forearm.
6. Mea culpa - In an age that expresses discomfort around the concept of sin, stepping into a confessional may seem antiquated.  However, Anglo-Catholic piety embraces the Sacrament of Reconciliation (or Penance) as a way to restore ourselves to right relationship with God and each other.  Repentance requires contrition, confession, penance, and amendment of life, and although there is a general confession and absolution in the mass, there is no substitute for the deep soul-searching and admission of specific sins that happen through auricular or private confession with a priest.  I can say without exaggeration that monthly private confession has fundamentally changed my life. 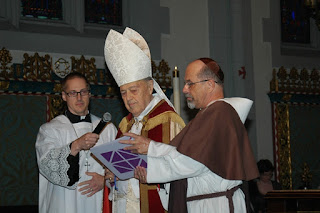 7. Miter - Anglo-Catholics have always regarded bishops as of the very essence of the Church, even when these same bishops have opposed Anglo-Catholic worship and devotions.  Bishops ensure the continuation of the sacraments of the New Covenant, and as the successors to the apostles, they preserve Church order, teaching, and authority from one generation to another.
8. Melisma - This is just a fancy word to indicate that a composer has set a long series of notes to a single syllable of a word in a musical work.  The Anglo-Catholic musical tradition, through luminaries such as John Mason Neale, has been characterized by lush and extravagant music, including hymnody, Gregorian chant, and classical settings of the mass, among other forms.  A rich musical setting is an appropriate accompaniment to the mass, which lifts us humans into the heavenly places where we participate with the angels and archangels in the worship of God.
9. Monasteries - One of the magnificent achievements of Anglo-Catholicism has been the restoration of religious and monastic communities to Anglicanism, which has deepened Anglican spirituality and service in response to the needs of the world. 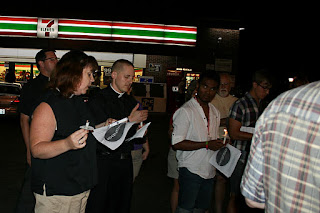 10. Mission - Stereotypes of Anglo-Catholicism often omit the great commitment of the movement to service among the poor and the spreading of the Gospel into new places.  Anglo-Catholic priests were known far and wide for their ministry among the poor in the urban slums of the industrial cities of Britain and America.  Anglo-Catholic bishops, moreover, were responsible for much of the evangelism that occurred as the nation expanded westward.  It is for this reason that the Midwestern United States has been known as the Biretta Belt.

Ending this reflection on mission is an intentional reminder that everything we do in the Church calls us into mission in the world.  I would argue that a faithful living out of Catholic identity requires an embodied commitment to not just worship and prayer, but also to movements of peace and justice in compassion and solidarity with the oppressed, the poor, and the marginalized.  That, too, is a mark of true catholicity.
Posted by Fr. Ethan Jewett at 11:35 PM