The Spirit of the Liturgy

In 1945, Dom Gregory Dix published The Shape of the Liturgy, which applied the discoveries of the so-called Liturgical Movement of the early part of the century to modern considerations of how worship is practiced in the Western Church.  Dix concluded, based on his study of early Christian liturgies and writers, such as Justin Martyr and Hippolytus of Rome, that the Eucharist has always consisted of four components:  offertory (offering), consecration (blessing), fraction (breaking), and communion (sharing).  Dix and other liturgists have undoubtedly made invaluable contributions to the worship life of the Church, but I often think that "high" churches like mine have a tendency to become overly obsessed with the navel-gazing minutiae of the liturgy's shape.  Therefore, on this eve of the feast of Pentecost, it might be appropriate for us to give a bit more attention to the Spirit, rather than the shape, of the liturgy. 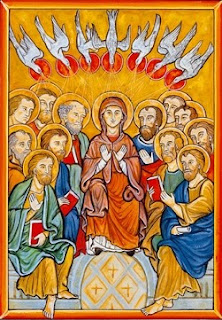 I remember once standing in the sacristy of my former parish as two teenage servers were agonizing over their roles in the upcoming mass.  They were quite naturally afraid of making a mistake and looking foolish in front of the congregation.  I reminded them that even I, glamorous and learned seminarian though I was, made liturgical mistakes all the time, and that what God required of us was faithfulness, not perfection.  God would show up in the liturgy and bless the assembly, even if we completely messed up.  Our job was simply to do our best.  That seemed to assuage their fears a little, and for the record, both of them did just great.  In fact, I always appreciated it when the rector would say that "there was a great spirit" in the liturgy, or among the servers, or in the congregation. He never cared if the liturgy was rubrically perfect or aesthetically flawless.  What he cared about, quite rightly, was the spirit with which the people worshiped God. 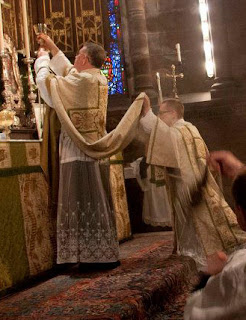 It might seem odd that I, as the Curate of St. Clement's--one of the highest churches in the country, if not the world--should privilege the liturgy's spirit over its shape.  But that's not what I'm doing.  One of the major reasons that I came to St. Clement's was to learn to do beautiful liturgy according to all the rubrics of the Old Rite.  As one of my priest friends has commented, "St. Clement's is like a priest finishing school. You're so lucky."  It certainly is, and I certainly am.  And the experience I'm accumulating now will help me to ensure that liturgy is reverent, orderly, and transcendent wherever I go after this.  But what I've come to love most about liturgy at St. Clement's is the camaraderie, devotion, and humor with which we all perform our liturgical duties.  The intricacies of the Old Rite were unfamiliar to me, as they were to many of our servers, who are also new, but it's wonderful to see how kind we are with each others' mistakes and how we look out for each other.  There is a good deal of laughter, humility, and love in our individual offerings to God in the liturgy, however imperfect they may be. 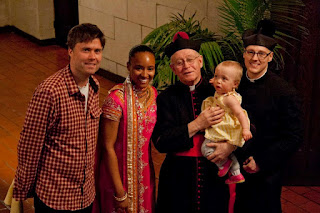 I have been in a couple Anglo-Catholic parishes where the liturgy is so affected that it seems a little silly.  On this point, it is suitable to quote Fortescue's The Ceremonies of the Roman Rite Described, that peerless authority on matters related to Western liturgy.  He quotes Martinucci who says about servers that "they should avoid too much precision or affectation, or such a bearing as befits soldiers on parade rather than churchmen.  They must certainly do all regularly and gravely; but if they behave with too punctilious a uniformity the sacred functions look theatrical."  Truer words were never spoken.  I may still be a liturgical mess to some "purists," but I can see that I and the whole altar party are getting better and better with every passing week.  More importantly, I feel joyful in the liturgy, when I see the smiles on the faces of the servers whenever there's a mistake or when we finally manage to nail some liturgical detail that has heretofore eluded us.  The liturgy we perform may be formal, but it is also warm and sincere.  What is developing is not only a liturgy that is a more polished oblation to God, but also a growing spirit of love that pervades all that we do.  So, "come, Holy Ghost, our souls inspire, and lighten with celestial fire."  Give us a spirit of wisdom, knowledge, understanding, counsel, piety, fortitude, and the fear of God.  We are ready. Come, Holy Spirit, come.