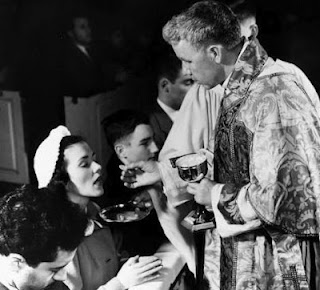 The traditional stereotype of a priest as a man of exemplary piety, unrelenting industry, and unimpeachable holiness usually makes me feel woefully inadequate.  Now, don't get me wrong; piety, industry, and holiness are all good qualities that I try to emulate.  I am a true believer; I work very hard; and I care deeply about the example I set for others.  But it's dangerous to believe one's own hype, to invest in crafting a persona rather than being a real person.  There's a great line from the movie, The History Boys, which I think could be applied to priests, as well as to teachers. "One of the hardest things for boys to learn is that a teacher is human," opines Mrs. Lintott (played by Frances de la Tour).  "One of the hardest things for a teacher to learn is not to try and tell them."  I always laugh at this line, because people often say things to me like, "You're not like any priest I've ever met before," or "Wow, you're actually like a real person," or "I didn't know that priests were allowed to drink or swear (not that I ever do, of course!)--won't you go to Hell or something?"  Yes, I pull up my pants one leg at a time like everyone else, and sometimes not all that gracefully.  So, all I can do is laugh.  In fact, my six months as a transitional deacon at St. Clement's have given me many occasions when laughter is the only healthy option.


On the Feast of the Ascension, for example, St. Clement's had a pontifical high mass, during which I served as deacon.  At one point in the mass, I was supposed to say a prayer at the foot of the steps leading up to the altar, and then ascend to retrieve the evangeliarium to chant the Gospel.  Unfortunately, on my way up the steps, I tripped on the hem of my alb and flopped face-first in front of everyone.  It was embarrassing.  But I picked myself up, got the Gospel book off the altar, received my blessing from the Bishop, and sang the Gospel beautifully.  Later on, one of the servers said, "you rebounded from it wonderfully, adding an elegant pirouette as you gathered yourself up."  I smiled and quipped that I was rather hoping in that moment that Jesus would snatch me off the floor and take me with him during his well-timed ascent into heaven.  The rector joined in the mirth, saying, "if anyone sniggers, we'll just say authoritatively that Ethan was acting as prescribed in the Ambrosian Rite of the 15th century, in which diving face-first into the carpet and a pirouette are indispensable parts of the liturgy!"  We all roared with laughter.  We laugh a lot at St. Clement's, especially the clergy.


In a life and liturgy that are often so serious, humor is good medicine for a number of things:  liturgical travesties, personal failings, pastoral inadequacies.  At times, I feel awkward, ridiculous, or clueless, but as with my liturgical nosedive, being a priest does not mean one avoids making mistakes; it means one learns how to rebound from them with a certain amount of integrity and grace.  Humor is good for that.  It reminds us that we are not simply cardboard cut-outs of some idealized image of a priest, but real people that are called upon to embody the priesthood in our own distinct ways.  The priest may be in persona Christi or an alter Christus, but he is also a human being with the full range of human attributes, some lovely, and some not so lovely.  As a drunk Elise (Goldie Hawn) declares angrily to Brenda (Bette Midler) in another of my favorite movies, The First Wives Club:  "You think just because I'm a movie star I don't have feelings. Well, you're wrong.  I DO have feelings.  I'm an actress. I HAVE ALL OF THEM!," she shouts, sloshing her martini all over the kitchen in a final histrionic gesture.  People quite rightly need priests to be role models, but it is dangerous to put a priest or anyone else on a pedestal.  To deny that a priest has his own frailties, his own foibles, his own weaknesses is pure folly.  To deny that church has its silly moments, camp, and humor is equally ridiculous.  That is why I was so delighted when the Bishop sang "Over the Rainbow" from the Wizard of Oz as the opening of his very fine Ascension Day sermon.  Being a serious priest sometimes means reveling in the humor we encounter in our vocation.  If laughter is a response to the ridiculous, it is also a response to joy, and I do hope to be a joyful priest.