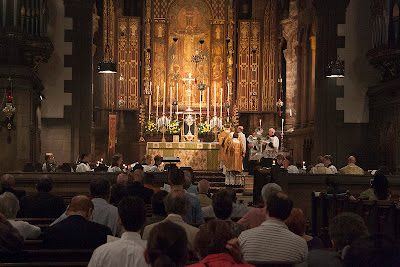 The latest edition of the Anglican Theological Review landed on my doorstep a few weeks ago, and I was intrigued by an article by Stephen R. Shaver, entitled, "O Oriens: Reassessing Eastward Eucharistic Celebration for Renewed Liturgy."  At first blush, I was delighted, since as a freshly minted priest, I had just begun saying mass, which at St. Clement's, we do facing east.  The author reviewed many of the classic critiques of eastward facing masses, most of which addressed the separation of the clergy from the people.  It is true that there is a great deal of physical distance at St. Clement's between the chancel and the nave in the church, both horizontally and vertically.  When I am standing at the high altar, I am raised far above and far away from the faithful.  The distance is exacerbated, moreover, by the choir stalls, which partially obstruct our view of each other.  This is an unfortunate limitation of our building, and yet I would argue that laity and clergy nonetheless feel connected during the liturgy.  People who used to looking the celebrant in the eye might find it challenging, but one gets used to it. 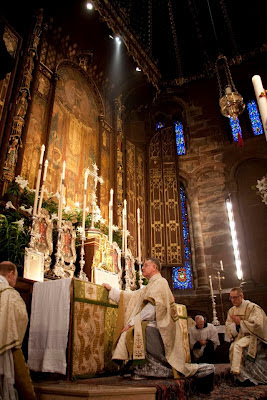 Although Shaver encourages exploration of eastward facing masses within the (post)modern Church, his primary criticism is that the sort of liturgy we do at St. Clement's promotes clericalism.  I can certainly understand Shaver's argument, but I would like to share my impressions from the perspective of a new priest.  The image that comes to mind when I am the celebrant at the high altar is that of Moses going up on the mountain to encounter God and receive the law.  The Book of Symbols: Reflections on Archetypal Images notes that "mountains are associated with revelation and transition; the mountaintop is where Moses meets God, where Jesus is transfigured.  Mountains suggest arduous, painstaking ascent and sublimation, the widened perspective, the peak experience, the thin air of headiness and sublimity." To look God in the face, so-to-speak, as a priest does at the consecration, can be quite humbling, and even terrifying for a new priest, who feels his inadequacy before so great a mystery.  The effect is indeed dizzying, and so far from feeling superior to the people at the foot of the mountain in the valley, he can feel rather vulnerable and small.  I certainly do.  Maybe that will change with years and experience, I do not know. 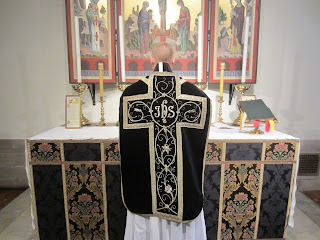 But I can say that, for me, it has been a great comfort for priest and people to face the same direction.  To use one contemporary idiom, I know that my sisters- and brothers-in-Christ "have got my back," that I am supported psychologically, emotionally, and theologically by all the faithful ranged behind me.  It strengthens me to live out my vocation at the altar.  It is as if we are all pilgrims ascending the mountain together and looking into a common future beyond the altar: the Kingdom of God.  As Shaver explains, one limitation of masses versus populum is that it makes the priest too much the center of attention, as if he is performing on a stage for the entertainment of parishioners in the "audience," rather than sharing in a common journey.  In fact, a jocular priest at my previous parish used to call one awkward moment at the end of the high mass, "the Adoration of the Clergy," since parishioners ended up just staring blankly into the priests' faces, while they waited anxiously at the altar to leave.  We ended up solving that problem, but for a while, it was a bit like deer in headlights.  Even arranging worship in a circle can be problematic, since it can give the false impression that the gathered community is sufficient unto itself.  It is hard in such an arrangement to see who is missing, who is excluded.  It is hard for a stranger to join a circle, but easy to join a parade.

Now, don't get me wrong, I have no objection to facing the people.  In the other Episcopal parishes to which I have belonged, the priest always faced the people during mass, and I found great meaning in this.  But I also have come to appreciate the unique eschatological experience created by priest and people facing in the same direction.  This is especially true when  I say mass in St. John's Chapel (which oddly enough faces west since its renovation), where the vertical and horizontal distance between priest and people is greatly minimized.  And, as for the charge of clericalism, I would just suggest, as one of my friends--a layman--said recently, that it really depends on how the individual priest wears his vocation.  The style of liturgy doesn't necessarily make him humble or imperious, and to be fair, the congregation makes its own indispensable contributions to the spirit of the liturgy.  All of this, though, is just one new priest's experience, so I encourage you to add your own thoughts below to continue the conversation.
Posted by Fr. Ethan Jewett at 9:05 AM