Back at the High Altar 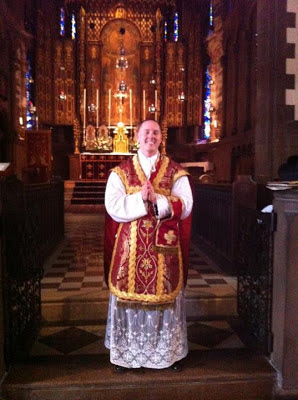 This past week has been transformative for me, because after nearly two months since I broke my hand, I resumed my normal liturgical life at St. Clement's.  I have tried to take my injury in stride and count my blessings, but I confess that I have deeply missed serving as celebrant at the sung and solemn high masses on Sunday morning.  For years, I dreamed of censing the gifts on the altar, chanting the collects, and pronouncing the words of institution; so spending week after week just sitting in choir while Fr. Reid sung the masses has understandably made Sundays a little less joyful for me.  Don't get me wrong.  I've been very grateful that I have been able during my recovery to say low masses during the week and at 8 a.m. on Sunday.  But the experience just isn't the same as when I'm celebrating mass with all the bells and whistles.  So, yesterday was divine. For the first time in months, I was actually able to join my right index finger and thumb for the consecration of the host.  My finger was stiff and sore, but it felt very good.  I felt that, as a priest, I was once again fully myself.

It wasn't the only moment this week, however, that I had felt restored.  Getting the splint and bandages off my hand also meant that I could hold a thurible and serve as deacon of the mass.  I had missed serving as deacon, not only because I enjoy all that censing and singing, but also because sitting by myself in choir meant that I had missed out on all the camaraderie and bonding among the altar party that I was used to.  It was  truly wonderful to serve for the first time as deacon for the exuberant and easy-going Fr. Al Holland, who was the celebrant for the All Saints and All Souls solemn high masses.  The attendance on All Souls' Day was low as it always is--especially given that it was a Friday night after a hurricane!--but I didn't care.  Few of us in the altar party were familiar with the many idiosyncrasies of the All Souls' liturgy, so there was a great spirit of teamwork as we all learned together and tried to make it work, and I think it turned out pretty well.

The best part of this week, though, has been the realization that the parish is growing stronger and happier as a result of the hard work, dedication, and enthusiasm of people in the parish.  Newcomers are showing up just about every Sunday and joining us afterward for coffee and conversation.  In one such conversation last week, a woman told me that as soon as she had walked into St. Clement's, she knew she had found her church.  She's now joining as a member.  Yesterday morning, I recruited a brand-new server; and our MC, Todd Grundy, began training one of the current servers, who is interested in doing more liturgically, to be subdeacon.  I'm always pleased to hear after high mass on Sunday that the weekly collection was good yet again.  It has been very rewarding for me to be part of this growth and vitality at St. Clement's, and to witness in concrete ways how the efforts of so many people are bearing fruit.  One person that doesn't get thanked enough, however, is our rector, Canon Gordon Reid, who set all of this work in motion and provided visionary leadership during a difficult transition.  I am especially grateful to him for the many ways he has been flexible and  accommodating of my injury during my stressful and painful rehabilitation.  I know that my broken hand has meant that we haven't been able to have solemn high masses very often, but Fr. Reid couldn't have been more gracious or supportive.  So, thanks to him and to the many others that have helped me out during the worst of the last couple of months.  It's nice to be back.
Posted by Fr. Ethan Jewett at 7:02 AM