And the Word was Made Flesh, A Christmas Homily 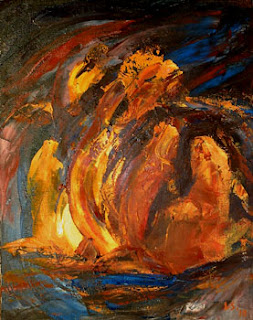 “And the Word was made flesh and dwelt among us.”  So, declares today’s reading from the Gospel of John, which usually ends every mass.  The challenge with this statement, and with today’s readings, generally, is that it is so philosophical and abstract.  Today’s lections are dense, doctrinal statements that would make even seasoned theologians’ heads swim, so how do we process these biblical passages in a way that is useful and practical for us as Christians?

Well, I’d like to begin with faces.  I’m remembering the face of an elderly man, named Kenny, who I visited often while he was dying of lymphoma.  My mother once said to me, “Ethan, I don’t know how you can stand being in the hospital, where there is so much disease and death.  Don’t you find it depressing?” “Well, Mom,” I said, “I often find it overwhelming, but not depressing, because one of the most deeply meaningful things I have ever done is to help Kenny die, and to die well.” As I held Kenny’s hand and looked into his face while the priest anointed him and administered last rites, I knew that Jesus was really present in that hospital room.

I am remembering the face of a homeless man at the Church of the Epiphany in Washington DC, who sat next to me during an early morning Eucharist.  Although he was initially embarrassed for being dirty and shabbily dressed, he accepted my outstretched hand during the intercessions and we prayed together hand in hand.  I can still picture his smiling face, and I knew Jesus was really present in that pew.

I am remembering the face of a young transgender woman as we talked while waiting in line for the restroom at this year’s Outfest.  She revealed that she had been hurt and damaged by religion, and yet she was eager to let me know that St. Clement’s presence gave her hope in religion.  She gave me a big hug as we parted and I knew that Jesus was really present in that embrace. 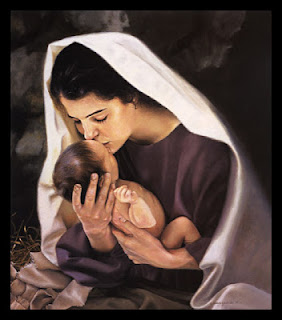 Theology is important and necessary, but when it is only an abstraction, a principle, it fails to reflect the fullness of God’s divine mystery.  God is more than a concept. God took on the fragility, the grittiness, and the flesh of humanity as a way of redeeming us from sin and death.  And he came into this world in the very same way we did, as a vulnerable baby, dependent upon the care and nurturing of others.  But in the cherubic face of this squirming infant, is the face of God himself, full of the inexplicable mystery of the Creator, as well as of the eternal Word of God that gave order to the Universe.  This Word has now become flesh, bringing God’s justice and mercy, God’s peace and love, into a broken world.  God has given a human face to the Logos that was and is and is to come.

One of the reasons that the Incarnation has been such an important event to Christians, and especially to Anglicans, is that the Word become flesh did not simply appear as a flash of light for an instant and then dissipate into the darkness.  John declares “in him was life, and the life was the light of men: and the light shineth in darkness, and the darkness comprehended it not.”  The Word lived and moved among us, experiencing the joys and tribulations of brittle human existence, just as we do, interacting with Creation in a way that challenged and transformed it forever.  The Word gave light and shape to the void in the beginning of Creation, and when it became enfleshed in Jesus, this Word gave light to a world overrun by the darkness of sin, cruelty, and hatred.  And the light of Christ, of the Word Incarnate, illumines us still.

The challenge of the Incarnation, however, is that it goads us into seeing things in a new way.  It is not simply recognition of the familiar, but a re-cognition of it that demonstrates that the familiar is actually quite different than we imagined.  It calls into question “so-called” truths that we take for granted.  Few people could detect God in the small babe in the manger, and few could detect God in Jesus the social critic, Jesus the rabble-rouser, Jesus the miraculous healer.  And few could recognize God in Jesus the criminal nailed upon the hard wood of the cross.  And yet, God was really present, really embodied, in all of these Jesuses.  In so many ways, we are all Pharisees and Herods and Pilates unable to see in a face anything but what we’re accustomed to seeing. The same old same old. 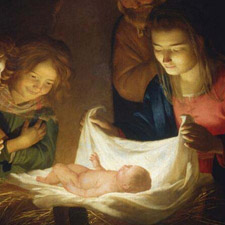 But Christmas is about seeing in this baby and seeing in all human faces a deeper truth that has been unrecognizable before.  It is about seeing the divine imprint in the face of a dying cancer patient, in the face of a homeless man, in the face of a young transgender woman, and even in the face of our enemies.  The Gospel of John observes that “He was in the world, and the world was made by him, and the world knew him not. He came unto his own, and his own received him not.”  The world could not see Jesus for what he was, and could not accept the truth that he had to share.  How often in our own world we refuse to see the reflection of God’s presence in those sitting next to us.  That great Archbishop of Canterbury, Michael Ramsey, said that “the Incarnation, with both cross and resurrection as its climax, is the divine self-giving, enabling men and women, through the now-indwelling Spirit to give themselves back to God in lives that are really a recreation of human nature in Christ.”

The Incarnation is therefore not just a renewed or expanding understanding of who God is and how God works, but it is also a call to live in a way, that we can more resemble the face of Jesus through our own self-giving.  This means learning to see beyond the surface of age, race, gender, and sexuality, embracing both those who have a roof over their heads and those who are homeless, giving equal dignity to those who are working and those who are currently unemployed, and joining hands with those you don’t like very much or identify with or understand.  As God has given himself to us in the flesh of Jesus, so we are to give ourselves back to him in our own flesh, in our hands and feet and faces in the world.   In our ordinary daily living, you and me.

But, more importantly, it is in our living as the body of Christ, as a community of believers, that Jesus will continue to be really present in the world, that the world will know him and receive him.  Merry Christmas, my brothers and sisters.
Posted by Fr. Ethan Jewett at 10:05 AM