There is a facebook group called, "Actually, young people do like traditional liturgy," to which I and several of my young churchy friends and colleagues belong. It serves to challenge the longstanding assumption (usually held by the ecclesiastical elite in their 40s-60s) that what young people want in the Church is edgy, hip, and experimental worship and music.  Some undoubtedly do, but there is also a large proportion of young people who are attracted and compelled by things traditional. This is a pattern that the Church cannot afford to overlook and ignore.

Now, let me just clarify that what I mean by "traditional" is not stuffy, uptight, or dull.  The problem with many folks' understanding of traditional is that they picture out-of-touch preachers droning on incessantly about dogma, dirge-like hymnody, and ritual that is either watered down to the lowest common denominator or absurdly precious.  Traditional liturgy need not be any of these things.  I serve in one of the most traditional churches in the world, and we regularly attract young people that are smart, hip, and unconventional, who love what we do.  Moreover, many of my young friends worship in Episcopal churches that bust out the incense, chant the mass, and pray novenas with passion.  Christ Church in New Haven, Connecticut put it more or less this way: "this is not your father's church (yuck!), this is your great-great-great grandfather's church."  Despite what Boomers may suggest, tradition can be cool.

But in all seriousness, I don't care if traditional liturgy is cool or not.  I need it to be deep; I need it to be Spirit-filled; I need it to be authentic; I need it to be transformational.  And despite the mockery sometimes directed at Anglo-Catholics and other high-church enthusiasts, I am proud that there are congregations dipping greedily into the well of our traditional liturgical heritage. After all, it is no accident that many of these traditions have endured for hundreds of years.  They connect us to the faith and countless generations of the faithful in a way that emphasizes the continuity of the Christian story and the universality of the Church. The Oxford Movement, for instance, emerged in the 1830s, because the worship and spirituality of the Church of England had become so anemic, lethargic, and perfunctory.  It needed a transfusion of spiritual blood.  The Catholic Revival began by rediscovering our theological roots, and then expanded to reclaim the richness of our liturgical, cultural, musical, and architectural heritage.  The cold rationalism of the Enlightenment softened to allow a sensory and affective experience of the sacred that had been lacking in the Church. 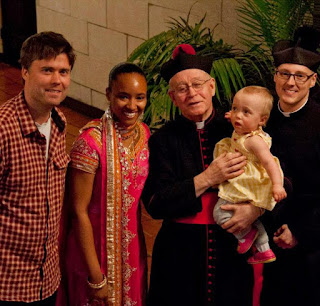 I think one of the reasons many young people are drawn to traditional liturgy these days is that postmodern society has a tendency to isolate and disconnect human beings from each other.  In an age where life is frequently too in your face, many young people are yearning for connection with the transcendent.  I remember Diana Butler Bass once writing that we need to "reenchant the universe" for this generation.  Amen, sister!  Indeed, Roman Catholic parishes that offer the Latin Mass are finding their pews filled, not with elderly folks who remember the Tridentine Mass from their childhood, but with young families with children.  In the Anglican tradition, younger people are finding in the dignified poetry of classical English, the mystery of incense and bells, and the ancient, enduring ritual of the universal Church a stabilizing force within the maelstrom of postmodern rootlessness.   Last Sunday, a traveler in her mid-twenties came to the 8 a.m. low mass with her backpack on her way to the museum, and shared with me afterward how deep and beautiful she finds the traditional form of the Mass, especially the Last Gospel.  This is only one of many such conversations I have had with college students, young professionals, and families with young children.  Although I am very interested in contemporary and emergent forms of worship,  I have been convinced through such conversations that the Church needs to promote traditional, as well as contemporary and emergent worship, by retaining what is good in it, while reforming the outmoded and oppressive theology that has often accompanied traditional worship.  For my part, I don't know if it gets any better than the Prayer for the Whole State of Christ's Church.

But good (not just traditional) liturgy requires intentional formation and lots of practice.  I confess that I'm disappointed when I see churches, for fear of being perceived as pretentious, put so little effort into liturgy and priestcraft.  At the 2012 Maundy Thursday service at Philadelphia Cathedral, for example, I witnessed a brother priest in the front row of chairs across from me in a rumpled cassock-alb that was at least six inches too short, slouched in his chair, with his arms folded over his chest and his feet sticking out straight in front of him, as if he were at home in his recliner watching Monday night football on TV.  I don't mean to be uncharitable or judgmental, but such sloppiness conveys to folks in the pews (or chairs) that the liturgy is something we don't take seriously or isn't worthy of our best efforts.  I mean, you wouldn't show up for a family wedding in your pajamas without running a brush through your hair, would you?  So, why should we send the message that God is less deserving of the very best we have to offer?  On the other hand, liturgy shouldn't resemble a military drill, performed stiffly and humorlessly.  Painful rubrical exactitude does not equate with transcendent.  Solemn high mass should be performed as the graceful, choreographed ballet it was meant to be, not grim-faced robots on parade.   So, I end on this note of exhortation only to suggest gently that whatever we decide to do, let's do it well--reverently, joyfully, and earnestly.  Young people are watching and discerning.  We take them seriously when we take the liturgy seriously.