Yesterday, I went to see my surgeon, Dr. M., for another follow-up visit to assess the ongoing rehabilitation of my hand after I broke it last fall.  The visits tend to take between 30 minutes and a hour, not because there is much to assess, but because my surgeon is an avid and masterful storyteller.  As in previous visits, Dr. M. was accompanied by a surgical resident, who was shadowing him during his patient visits.  Although Dr. M. describes himself as an atheistic Hindu, he and I have much in common and great respect for each other.  He honors my life and vocation as a priest, and I honor his as a healer and a humanist.

Now, Dr. M. began with one rather involved story of an uneducated woman in the Bengal area of India who became a grass-roots activist and successfully challenged the violence and corruption of the regional government.  So successful was she, in fact, that she and her supporters won a surprising landslide victory in the Bengali elections and initiated an impressive series of reforms that improved the culture and economic prospects of the area.  It was an interesting story, and I thought he would end there, scribble a few notes in my chart, and write me a new prescription for therapy.  But then, Dr. M. continued with a story I had heard a couple of times before.  Knowing that he wanted to tell it again for the benefit of the resident he was mentoring--who politely feigned interest--I abetted and encouraged his storytelling.

Dr. M. explained that he often traveled to developing countries as a volunteer to perform surgeries on poor people who could not afford health care.  He noted that his specialty was cleft-palate surgeries, and he would perform 100-200 of these procedures on children over the course of a two-week visit.  Hospital administrators and CEOs, he lamented, don't often have an appreciation for the human side of medicine, and so he would bring them on these humanitarian trips.  The first couple of days they would be really pissed off, he said--Dr. M. never minces words--because he'd make the CEOs and hospital administrators participate in the manual labor of cleaning, setting up equipment, and performing tasks they apparently considered beneath their dignity.  Yet when the surgeries started, Dr. M. would ask the CEOs to pick the kids up from their mothers, bring them in for surgery, and observe the procedure being performed.  Then, he would ask these bureaucrats, so obsessed with the bottom line and operating margins, to deliver the children back to their mothers after surgery. 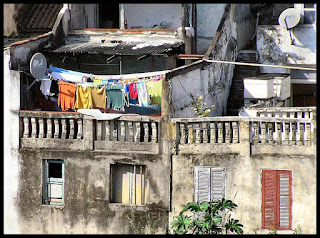 About 99% of the time, Dr. M. said, the mothers would burst into tears when they saw their children transformed by the surgery, and they would thank the CEOs profusely for their kindness and compassion, hugging them and weeping on their shoulder in thanksgiving.  By the third or fourth time this happened, the CEOs would be weeping, too, and by the end of the two weeks, they didn't want to come home.  They wanted to stay where they felt that they were making such a profound difference in the lives of very poor people.  Dr. M would consequently advise them, "remember what you have experienced here, the lives you've changed, and rebuild your hospital according to that image when you get back to the US."  Most CEOs, he declared, were transformed by their experience.  Of course, there is the odd one who was not, he told me yesterday.  "One guy was a complete a**hole," Dr. M. sniped.  "This guy was invited to tea by one grateful mother whose son had had the surgery, and he complained that her house was too shabby and run-down.  He couldn't believe she had the gall to bring him to a place like that." He paused, and then added, "I couldn't get through to him at all."  Dr. M., exasperated, sighed heavily in frustration.

This was an amazing witness.  It is stories, such as this one, that articulate our values, that say who we are at our core.  That is why Dr. M needs to tell it so often, to different people, and even to people that have heard it before.  It is his way of saying, "this is the kind of doctor I am; this is the kind of person I am."  That is why I didn't mind hearing it for the um-teenth time.  It is a ritual that continues to impart meaning and purpose to one's daily existence, and this should be honored and cherished by attentive listening.  In this holy season of Lent, we are called to remember our common humanity, our common call to love and care for one another.  May we recognize Jesus' commandment to love God and our neighbors as ourselves in the sacred stories others offer us, for they may come to us from unexpected quarters.  Listen carefully.
Posted by Fr. Ethan Jewett at 7:21 AM