Pessimism is No Antidote to Terrorism

I am recovering from the intense (and much-dreaded) ordeal of moving cross-country, so this week's post is a bit tardy.  My relocation back to Chicago came on the heels of the Boston Marathon bombing, and so as I drove the U-haul nearly 800 miles with my mother next to me for moral support, I finally had ample leisure to meditate on my vocation and the state of the world at large.  I had packed box after box in the St. Clement's rectory listening to the unfolding details of the tragedy, wondering if my dear friends in Boston were safe, and feeling despair at the cruelty and evil of which humanity is capable.  The frequency of terrorist activity is truly shocking, and I found myself expressing a very pessimistic view of human nature and progress.

I caught myself in my pessimism, and thought, "this is so not me."  I spent a good part of my young adult life in my French lit PhD program revering Jean-Jacques Rousseau, who preached the perfectibility of human beings--that human beings were, at heart, inherently good and were evolving toward an increasingly virtuous and ethical state.  This view also coheres with my theology of Creation, which affirms that God declared the natural order and human beings he had created very good.  Yet, here I was with the endless highway before me thinking humanity was pretty awful.  This was so not me; this was not the optimist I had always been. 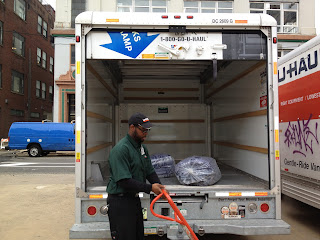 Then humanity intervened.  Everywhere we stopped during our long drive from Philadelphia to Chicago, people were kind, pleasant, and helpful, reminding me of the very best of human nature and experience.  This was especially palpable as I approached the gas station to fill up the U-haul for the last time before returning it.  I was exhausted and hungry, and I had what you might call an unfortunate incident with the U-haul.  Don't worry, vehicle and passengers all escaped unscathed.  I'll spare you the embarrassing details, but suffice it to say that it required the technical and emotional support of a wide range of people.  Complete strangers approached me to ask if I needed help, to offer advice, and to express sympathy.  It was really quite touching, and even in my weary and addled state, I was able to laugh and smile.

I am, of course, not trying to downplay the horror of a tragedy like the Boston Marathon bombing, but if we start thinking that humanity is incapable of improvement and redemption--that human kindness, generosity, and love are less powerful than human cruelty, violence, and hatred-- then we've given up on humanity's future.  If we give in to pessimism, then we give up on hope; we give ourselves over to believing that our best days are behind us, and that we cannot change the trajectory of violence and destruction along which some people are driven to lead us.  Being a Christian, on the contrary, forces me to be an optimist, even when I'm tempted not to be.  I believe that humanity is inherently good, because this goodness reflects God's intrinsic goodness.  I also believe that Jesus died on the Cross, so that humanity would be delivered from a future of violence and hatred, destruction and despair.  When I recite the Creeds, or even when I simply say I believe in God or Jesus, I'm also saying that I believe that humanity has a future of peace, kindness, and love, one that terrorism cannot ultimately defeat.  Perhaps that's naive pollyannish foolishness, but it's a better starting place than the pessimism that gives terrorism power over us.
Posted by Fr. Ethan Jewett at 9:20 PM