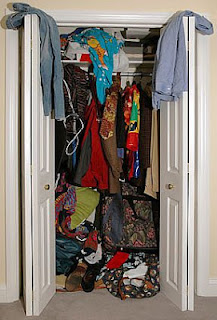 I've been back in Chicago for a month this week, and I'm still unpacking boxes, hanging pictures, and trying to figure out where to put all this stuff.  I don't have nearly enough storage space.  The closets are a disaster.  So, as much as I've dreaded it, I'm culling old file folders and tossing out ratty bed linens, trying to find room anywhere I can.  I encounter a set of hideous placemats and happily place them in the garbage bag next to me.  The funny thing is that this drudgery is turning into a very rewarding exercise.  I smile when I stumble unexpectedly upon an item that conjures up a cherished memory.  "Oh, that takes me back.  I remember when so-and-so gave that to me.  Boy, was that a fun day!  I miss spending time with him/her." 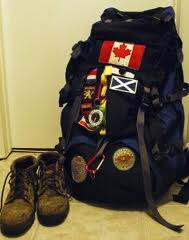 During this season after Pentecost, when we focus on new life, revisioned identities, and altered trajectories, we can sometimes forget about all the stuff that we bring with us on this journey of the Holy Spirit.  And some of this stuff is good.  I'm not so sure that putting new wine into old wineskins, as the Gospel warns, is such a bad thing.  Especially if that old wineskin is me.  Maybe that's not a good biblical metaphor to develop.  Perhaps the Christian journey is more like an American or Canadian college student backpacking across Europe.  One starts out with his or her backpack half full, with some ready-to-eat food, extra pairs of socks, a First-Aid kit, and a book for those long train rides across unfamiliar landscapes.  A traveler needs to bring some supplies with him or her to make the journey comfortable and safe, but he or she also needs to leave room for items collected along the way: gifts for friends back home; souvenir maps, postcards, and other trinkets; keepsakes from hospitable hosts.  Many students will even adorn their backpacks with patches that serve as badges of honor to chronicle the countries they've traversed.  I certainly did, and I still have the patches to prove it.  At least, I think they're in the bottom of some box in a closet somewhere. 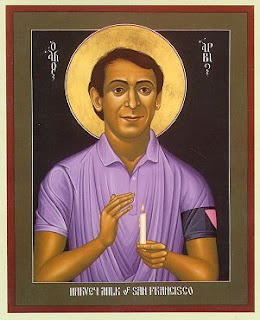 Today is the anniversary of the birth of the gay activist and politician, Harvey Milk, which should remind us that, as much as we may rightfully wish to focus on the future, we bring everything we have been with us into that future.  Our enthusiasm for the possibilities of the life yet to come shouldn't obscure us from the things within us that have gotten us this far.  I am who I am, because of what I have been; and what I will become, builds upon who I am now.  Current efforts in favor of marriage equality in the United States, for instance, must not lose sight of the many people and struggles that have come before and provided the foundation for the future sought.  Despite recent progress, we must remember that there are many who are enduring the first terrifying steps of coming out of the closet.  The teen in Idaho whose anxious coming-out letter I read recently.  The middle-manager who fears for his job and livelihood in a state that does not identify sexual orientation as a protected status in employment.  As dated as they might seem to some, the struggles of identity, belonging, and discrimination that Harvey Milk championed are as timely and real as ever, in the United States and around the world.

The truth is that coming out of the closet is an ongoing and iterative process that people experience every time they seek a new job, join a new church, move to a new community, or make new friends.  Each time this occurs, men and women have to decide what about themselves it is safe or desirable to share, which artifacts of their past to display and which hopes for the future to confide.  Out of that closet come wounds, scars (some undoubtedly badges of honor), and hope, that when integrated, allow people to live with integrity.  Harvey Milk was a person who embodied this experience, and as a Christian and a humanist, I am grateful for his example. I am often surprised and saddened by the number of young LGBTQ people who are ignorant of their own cultural history, of the sacrifices and struggles of luminary figures, such as Harvey Milk.  On days such as this one, may we all remember and share with others the stories of those who have gone before us and made the future toward which we are working realizable.  Old and new, history and hope, make us who we are.