Sermon for Easter 5: "How Can I, Unless Someone Guides Me?"

[Several people have asked me for a copy of this and previous sermons, so I am going to begin posting them online for everyone's convenience.]  Here is a link to the audio:

Philip asked, “Do you understand what you are reading?” the eunuch replied, “How can I, unless someone guides me?” And he invited Philip to get in and sit beside him.

The news cycle this past week has been robust, and perhaps like me, you are numb and bewildered.  On Tuesday, I listened to the two+ hours of oral arguments before the US Supreme Court on marriage equality, followed by Nina Totenberg’s analysis on National Public Radio.  News reports have dissected the earthquake and relief efforts in Nepal, the sentencing of Boston Marathon bomber, Dzokhar Tsarnaev, and of course, the terrible rioting in Baltimore in the wake of Freddie Gray’s funeral.  These reports have been accompanied by countless opinions, commentaries, and diatribes that appear all over social media, including my Facebook feed.  It is overwhelming.  Like the Ethiopian eunuch, it is easy to be perplexed by what we read and hear.  So, to answer Philip’s question, “no, I do not often understand what I’m reading.  How can I, unless someone guides me?”

The challenge for all of us, whether we are Christians or not, is to become aware of the various lenses through which we view people and events.  On one level, attributes like socioeconomic status, race, gender, sexuality, generation, and political affiliation inform our perspectives and our prejudices.  On another, the framing of media, both the professional media and less-official social media, influences how we perceive the world.  Please understand, I am not naively advocating the shedding of all ideological lenses and agendas, but rather the development of an awareness of what these lenses and agendas are, and to weigh them with a critical eye.

We also use theological lenses to shape our perception of the world, and I think this is a very good thing.  Once upon a time, Christian denominations, and people of faith generally, exerted a formidable moral authority in the public sphere, where ideas and events were debated and decisions were made.  In an increasingly secular society, this authority has waned, but I would argue that it is still “meet, right, and our bounden duty,” to quote the Prayer Book, for Christians to lend their voices and feet to debates on public issues.  I believe that is what today’s Scripture readings are calling us to do.  “Little children,” the First Letter of John declares, “let us love, not in word and speech, but in truth and action.”  This is gutsy and evangelistic talk that calls for more than empty words; it exhorts us to live out the good news of the Gospel. 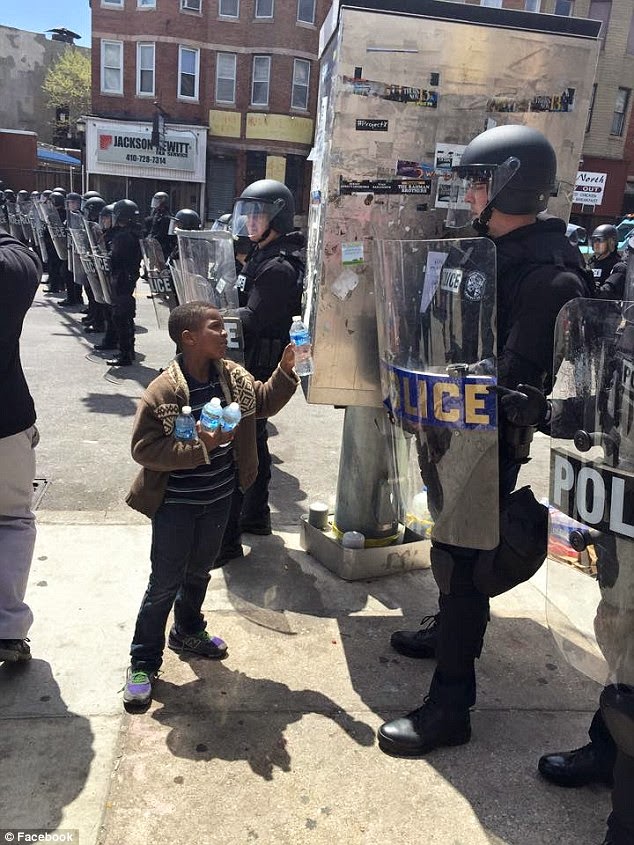 Although this week’s events largely focus on pain and tragedy, I speak from a hopeful, Eastertide frame-of-mind.  There is ample evidence, it is true, that we do not love each other, but there is also evidence that we do.  One of the most powerful images from this week’s events in Baltimore is a photo I encountered of an African American boy of elementary school age offering a bottle of water to a white policeman decked out in riot gear.  It was poignant to see this little child facing the long line of armed police with a gesture of civility and kindness.  And I would hope that there were civil and kind policemen, too.  The point is that this photo puts a different face on the event, offers another lens for us to use.

Like Jesus before Pilate, we are faced with that fundamental question, “what is truth?”  Truth as an absolute is hard to come by, if we are honest about the slant of this or that media outlet or our own prejudicial perspectives.  If we are to believe the First Letter of John, one truth we can rely on is God’s love.  “We know love by this,” the writer states, “that [Jesus] laid down his life for us—and we ought to lay down our lives for one another.  How does God’s love abide in anyone who has the world’s goods and sees a brother or sister in need and yet refuses help?”

The truth of God’s love and his command for us to lay down our lives for each other—not to snatch each other’s lives away—is a theological lens through which we need to view the world’s events.  Our theology shapes what we see and hea 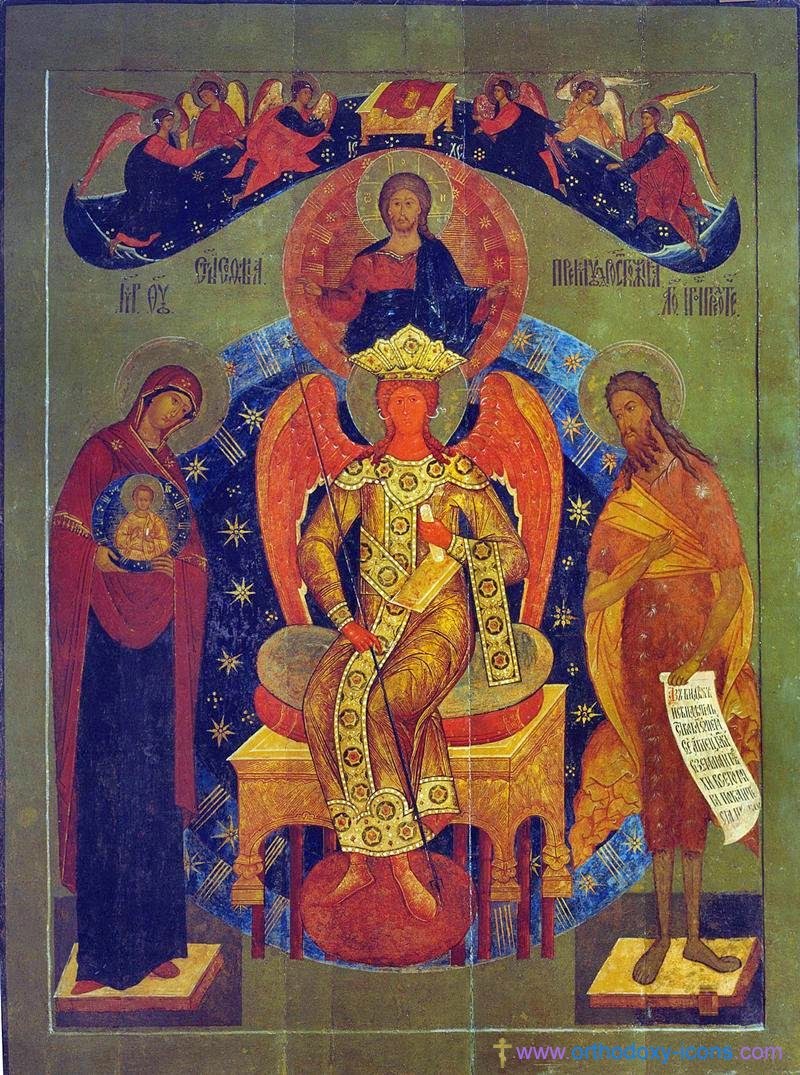 r, and how we interpret it.  The Gospel of John assures us repeatedly that God has given us the resources to deal with future challenges in our lives as people of faith.  Jesus tells us in this morning’s reading, “I will not leave you orphaned; I am coming to you,” by sending another Advocate, whom he calls the Spirit of truth.

Well, who is this Spirit and how does she work?  Is this Sophia, the Wisdom of this week’s Daily Office readings, of whom the author, reputedly Solomon, says “I preferred her to scepters and thrones, and I accounted wealth as nothing in comparison with her.  Neither did I liken to her any priceless gem, because all gold is but a little sand in her sight, and silver will be accounted as clay before her.  I loved her more than health and beauty, and I chose to have her rather than light, because her radiance never ceases.” It is the Spirit of wisdom, I would suggest, to whom the Ethiopian eunuch turns following his baptism.  The Acts of the Apostles attests that “when [Philip and the eunuch] came out of the water, the Spirit of the Lord snatched Philip away; the eunuch saw him no more, and went on his way rejoicing.”  It is curious—no amazing—that the eunuch’s response to Philip’s sudden disappearance is rejoicing, rather than distress.  He was not orphaned.  The eunuch, like all the baptized, was set on a path toward life and abundance, guided by the power of the Spirit, the Spirit of truth and of wisdom, that same Spirit that moved over the inchoate waters of Creation and brought forth a miraculous, ordered universe.  This is a God who loves us and guides us through all our moments of struggle, joy, and yes, even tragedy.

The greatest wisdom the Spirit of God can impart is that we human beings are flawed in judgment and character, and we are lost without her guidance.  As God’s creation, we ARE very good indeed, and yet we see only a narrow piece of the whole picture.  Who we are as individuals limits our perspective and creates lenses though which we see only faintly, only dimly.  The wise thing to do, in such a situation, is to temper our tendency to pass judgment and assert certainty by seeking out people with different viewpoints, with a different frame of reference, with different lenses.  We may not change our minds, but at least, we may learn something in the process that nuances our understanding and makes us kinder, more forgiving, and more loving, as our reading from the First Letter of John encourages us to do.  Developing better theological lenses through collective discernment in community, engagement in debate in the public square, and individual spiritual growth are ways we cooperate with the Spirit in becoming better and wiser disciples of Jesus.

Peace and justice may or may not prevail in our nation’s capital, in Baltimore, in Boston, or in Nepal, but I believe that that the Spirit of God, in the fullness of time, has a pretty good chance of guiding us there eventually.  And that is the Good News of the Easter Resurrection.  Alleluia, Christ is risen.  And may the people say:  The Lord is risen indeed, Alleluia.
Posted by Fr. Ethan Jewett at 3:16 PM