A Ministry of Interruptions

For the last month, I've been serving as supply priest at St. Peter's Episcopal Church in the Lakeview neighborhood of Chicago.  We began June with the Feast of Corpus Christi, complete with incense and Our Lord exposed in a monstrance at the Mary Shrine; and we concluded it with Chicago's annual Pride celebration.  It is deeply joyful for me as a priest to witness a congregation understand and embody the connection between these two events.  God really present in the bread and wine, and God really present in the midst of humanity. When I preached on yesterday's Gospel, I explained that the clumsy combination of the stories of the healing of Jairus's daughter and the healing of the hemorrhaging woman reflected how real ministry often works.  Instead of a tidy, seamless narrative that satisfies our need for immediate gratification, we are offered one story that meanders and is interrupted by another story before reaching its end.  Ministry is punctuated by numerous and frequent interruptions. 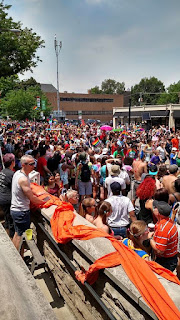 Ministry is also unpredictable and messy, a bit like Sunday's Gospel reading. Sometimes, we have to improvise and think on our feet. After an early mass, we gathered outside the church and claimed our spots to watch the festivities, while people began to line the parade route.  Some came extravagantly arrayed in rainbow tutus, face paint, and Hawaiian leis,waving gay pride flags.  And there were, of course, those who were wearing very little at all, and others who had clearly had too much to drink.  As they walked by, I wished everyone a "Happy Pride," Most would smile and return the greeting.  Many seemed surprised, but pleased, to see the Church supportive of them.  Then, something happened I did not expect.  People began to ask to take their picture with the priest in his rainbow stole, and eventually young people mobbed the Church steps for selfies and pics for their Facebook, Twitter and Instagram feeds.  Some even shared very emotional testimonies of how moved they were to see the Church on their side.  Crowds of young people whisked by us cheering and offering us fist-bumps and high-fives as a thank you for just being present.  During the parade, people on floats blew us kisses and gave us a thumbs-up. 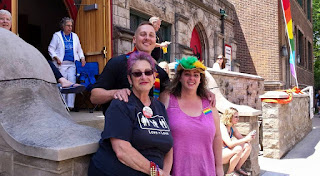 This was, of course, a joyful and uplifting experience, but it also reinforced for me that the Church is still viewed as a largely absent and oppressive institution by many.  That the Church, or I, as a priest, should be such a novelty at an LGBTQI festival speaks to the many ways we have failed to engage and embrace large groups of God's people.  The day was beautiful, and yet, sobering.  It served as a cautionary reminder to us as Christians to work arduously to correct and repent of our past failings by working for justice and inclusion in both the Church and society.  What a wonderful world it would be if people just expected a congregation or its priest to be present for celebrations like the Pride parade, as if it were just a ho-hum, matter-of-course, routine part of the Church's life and witness.  Not radical at all, just a relevant, integral part of who we are and how we live.  If we take away one message from the day, it is this: the church has a place in society, and society wants us to claim it.