In preparation for the 78th General Convention of the Episcopal Church, the Society of Catholic Priests has launched the third in its TractSwarm series, this one on the revision of the 1979 Book of Common Prayer.  Let me begin by stating quite clearly that I am in favor of revising the current Prayer Book to reflect the norm that has emerged in the last 35 years.  However, Prayer Book revision is a thorny and controversial process that requires careful thinking and consensus building, where the Devil is truly in the details.  As I struggled with how to approach this daunting topic, I drew up a list of fundamental questions with some examples as a starting point for my own thinking. 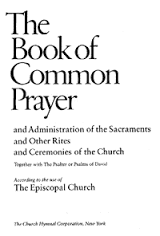 Each of these questions could be the subject of a long and painfully boring expostulation.  My principal concern, however, is how to preserve the principle of Anglican comprehensiveness in any revision process.  For me, our "broad-tent" ethos--embracing evangelicals, Broad Church, Anglo-Catholics, emergent Christians, and others--is a noteworthy strength of Anglicanism, and must be preserved.  During the revision of the 1928 Prayer Book, the process was often characterized by a winner/loser mentality that was deeply divisive.  This adversarial dynamic has also been present in recent controversies over the consecration of gay and lesbian bishops and same-sex unions, which causes me to wonder whether we as a Church are relationally strong enough to enter another fray at this time.  Think about how passionate we can be about the distinctive Sabon font in which the Prayer Book is printed, and you'll get what I mean!  To say that we have very strong opinions is an understatement.  Yes, we LOVE the Prayer Book, every jot and tittle.

But, of course, we are not just people of routine attached to familiar things like fonts and the wording of eucharistic prayers.  The Book of Common Prayer is the vessel that holds our unique theology and identity as Episcopalians.  Are our bonds of trust and affection robust enough to love and include one another as we differ passionately over fundamentals?  Can we come to consensus without imposing our agenda or marginalizing some minority group within the Church?  I am not suggesting that we shy away from the challenge, but rather to be honest about what we are taking on.  If ever the Episcopal Church needed to have a fierce conversation, to use the framework developed by Susan Scott, the Prayer Book would be it.  If, as she says, the conversation is the relationship, then we need to learn to do a better job of communicating with each other while we refine the book that articulates who we are as a community of faith.

My proposal is this: we approach Prayer Book revision much like we have the sanctoral calendar by being expansive and permissive, essentially a hub-and-spoke model. We begin by devising a Prayer Book (the hub) that provides a mainstream core for the entire Church complemented by authorized  additional resources (the spokes) for local or optional use that respects the comprehensiveness of Anglicanism. This does not mean a Prayer Book that comprises a "lowest common denominator," but rather provides a solid and normative foundation to which other resources might be connected.  With the creation of the 1979 Prayer Book, the liturgical fullness of the Sacred Triduum was restored.  It would be similarly useful, for example, to authorize propers for Corpus Christi or Feasts of Our Lady for parishes that have long celebrated those feasts, whether in Enriching Our Worship, the Book of Occasional Services, or another resource.  Or perhaps we rely deeply on our Native American/First Nation communities for resources to mainstream the Church's observation of the Rogation liturgies.  The possibilities are practically limitless, much like the mystery of God.

In my own ministry, I have drawn from an abundant store of supplemental resources designed to make worship richer and speak to a wider range of contexts, theological priorities, and pieties.  These include the New Zealand Prayer Book, the St. Augustine's Prayer Book (both the original and revision), the Manual for Priests, the English Missal, and Enriching Our Worship.  They even include liturgical material developed and used by priest colleagues for unusual situations for which the Episcopal Church has not developed materials, such as the blessing of chalk at Epiphany.  Liturgy requires a certain amount of flexibility, creativity, and improvisation to respond authentically and pastorally to the needs of a congregation. A Prayer Book that offers a common foundation, and yet encourages the use of a wider range of authorized, supplemental resources seems to me to be an approach that is both postmodern, as well as grounded in tradition and longstanding practice.  The Episcopal Church has prided itself on fostering unity without uniformity, of delegating some discretionary authority to its bishops, clergy, and other leaders on liturgical matters.  If we're honest, we haven't believed in a "one-size-fits-all" approach for a long time, and this has made us stronger, diverse, and more inclusive as a Church.  After all, we are the Church that has commended belief in the Real Presence without prescribing how exactly this mystery is to be defined.  We are the Church that has declared to the faithful, "all may, some should, none must." This is the great legacy of Anglicanism and the Book of Common Prayer.