If Jesus Rode the El Train

Today's Daily Office readings include the story from the Gospel of Mark about Jesus's preaching tour in Galilee.  In classic Jesus fashion, Our Lord goes out very early into the wilderness to pray--to find a few minutes of peace and quiet before tending to the needs of his demanding band of followers.  Simon (aka Peter) and the other disciples notice he is missing and go in search of him.  The Gospel records that, "When they found him, they said to him, ‘Everyone is searching for you.’ He answered, ‘Let us go on to the neighboring towns, so that I may proclaim the message there also; for that is what I came out to do.’ And he went throughout Galilee, proclaiming the message in their synagogues and casting out demons."

The urgency conveyed by the disciples' report, "everyone is searching for you," is matched by the urgency of Jesus's command to go into the neighboring towns to preach the Good News there also. Call and response. The people call to Jesus, and he goes out to meet them where they are with the message of new life.  This story is a powerful illustration of the missionary zeal that characterized both Jesus's ministry and the fledgling Church in its early years.  I sometimes wonder if we in the twenty-first century can really understand the immediacy and intensity of Jesus's hands-on contact with the average person, particularly the suffering and marginalized.   And then I find Jesus in some unexpected place, continuing to preach the Gospel message and cast out demons. 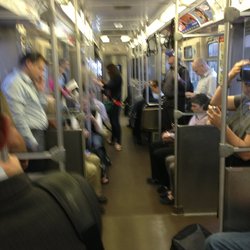 Like I did today.  This afternoon I took the Red Line downtown to meet a parishioner for coffee.  A
young homeless woman walked up and down the subway car asking commuters for spare change.  I took out my wallet, which was empty, and apologized for not being able to help her.  While many travelers pretended not to hear or see her, the man seated next to me greeted her and told her where she could find work.  He told her that a security company on the south side was hiring, and that if she applied, she would likely be hired.  She thanked him for the information, and then scoured the inside of her backpack for a pen.  I offered her the pink highlighter I was using to underline passages in the book I was reading, and she asked him for a phone number.  The man replied that he couldn't remember, but proceeded to give her detailed directions about how to get to the company, while I tried to look up the phone number on my iPhone.  The young lady hurriedly wrote down his directions, returned my highlighter, and then got off the train at the next stop.

As the train pulled away from the station, I thanked the man for his kindness, who had clearly represented Jesus in this encounter as well as (or perhaps better than) a person in a clerical collar.  He looked down at the floor and said, he knew how rough it could be, and how people sometimes just needed a little help.  I was moved by his sincere compassion and solidarity.  He engaged the woman as a peer, with dignity and respect.  No pity, no condescension, just Good News.  It was a simple, and yet exemplary, model of Christian witness.  As Jesus's hands and feet in the world, average people have the the power to heal the sick and cast out demons, to represent Jesus in places where he may be sought, even the unexpected and unconventional ones.