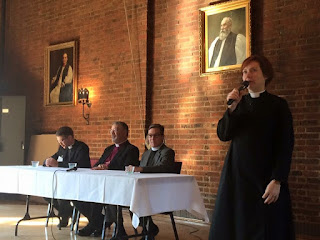 I am just back in the parish after having been on the road for a solid week, first at the Society of Catholic Priests annual meeting in Denver, and then at the Diocese of Chicago's clergy conference. Both events provided a stirring experience of the universality of the Church, the fact that we live out the Christian faith in our own distinct contexts, animated by different cultural traditions, pieties, and musical styles. And our theologies are often varied, as well. We discussed, debated, and even argued about what constitutes solid Anglican teaching. Are hospitality and justice, for example, sufficient reasons to change, say, the Church's official position on the communion of the unbaptized? Do they provide an adequate justification for revising the marriage rite in the Book of Common Prayer to encompass same-sex couples, or is more theological work needed?  And then, there's the Nicene Creed, another topic on which much digital ink has been spilled this week.

The core issue of the Nicene Creed is its status in a revised Prayer Book. Should it be included, and if so, why? In what form should it be retained? Should it remain a normative and integral part of the primary service on Sundays? Regardless of our different ministry contexts, the Nicene and Apostles' Creeds serve as a focal point of unity in the Anglican Communion. It will probably not surprise you to hear that people of good conscience have expressed a variety of views on this subject. And I am among them. So, here are my top five concerns about the Nicene Creed:

1. Restore the original Niceno-Constantinopolitan Creed. My beloved read the words Niceno-Constantinopolitan over my shoulder and said it sounded like an exotic ice cream medley. I laughed and admitted that this blog entry might seem a bit esoteric and pedantic to some, so if it is, my apologies. But, in all seriousness, I think the Nicene Creed is a topic worthy of thoughtful debate. As "Crusty Old Dean," Tom Ferguson, has colorfully argued on his own blog, the Episcopal Church should decisively get rid of the filioque clause in the Nicene Creed that claims that the Holy Spirit proceeds from the Father AND the Son. For one, the filioque muddles and problematizes orthodox Trinitarian theology. Secondly, it was a unilateral decision to counter the Arianism of the Teutonic Christians, who viewed Jesus as inferior to the Father. Originally added at the Council of Toledo in 589 and later enforced by Charlemagne, the reason it was contrived no longer exists. To revert to the original Creed as formulated at the Ecumenical Councils of Nicaea in 325 and Constantinople in 381 would more faithfully recapture the sensus fidelium of the early Church that we embrace and pass on to future generations.

2. Pass the torch. Each generation of the faithful is charged with passing on the core tenets of the faith to the next. Archbishop of Canterbury, Michael Ramsey, wrote on the first page of The Anglican Spirit,


"I want to talk about some of the main enduring characteristics of Anglican tradition, the way in which the Anglican Church has in its life and teaching, theology and sacraments, given over that divine paradosis--which is the Greek word for something that has been 'handed over' or 'passed on.' For when we Christians speak of tradition, we mean the experience of the Christian community lying authentically within that which God through Christ has handed over for the revelation of himself and the salvation of men and women everywhere" (Ramsey, 1).

So, for example, what is the point of the catechumenate if we fail to hand over the core beliefs of Christianity as preserved in the Nicene Creed. In the current version of the catechumenate in the Book of Occasional Services, the direction is given that "it is appropriate that the Apostles' (or Nicene Creed) be given to the Candidates for Baptism on the Third Sunday in Lent and the Lord's Prayer be given to them on the Fifth Sunday in Lent." If we dispense with the Nicene Creed, then exactly what faith are we passing on? What statement of belief are they receiving?

3. Prayer Book revision. This leads me to Prayer Book revision. Dr. Derek Olsen has addressed a number of concerns that have arisen from a recent statement on Prayer Book revision from his colleague on the Standing Commission on Liturgy and Music, The Rev. Dr. Ruth Meyers. Dr. Meyers described the Nicene Creed as a stumbling block for many, and proposed that it not remain a standard feature of Sunday worship. This suggestion ignited the blogosphere and occasioned a flurry of responses, such as in the Living Church and on the Smoking Thurible blog. The Nicene Creed, I would argue, forms part of the esse of the Church, and is therefore not dispensable. Olsen argues, moreover, that Meyer's proposal is symptomatic of a cultural shift away from orthodox Christianity toward a variety of heresies aligned with Moral Therapeutic Deism. C. S. Lewis makes the point in Letters to Malcolm, for example, that "first, [common prayer] keeps me in touch with 'sound doctrine.' Left to oneself, one could easily slide away from 'the faith once given' into a phantom called 'my religion.' [...] By the way, that's another thing to be avoided in a revised Prayer Book. 'Contemporary problems' may claim an undue share. And the more 'up to date' the book is, the sooner it will be dated" (Lewis, 12). If you don't believe Lewis, take a look at Eucharistic Prayer C (referred to by people of diverse churchmanship as the "Star Wars Prayer") in the 1979 Book of Common Prayer, and tell me it doesn't seem dated, despite its often lovely, lyrical imagery. As a guy who grew up in the 1970s, it does have a bit of a ''groovy, man" vibe to me. 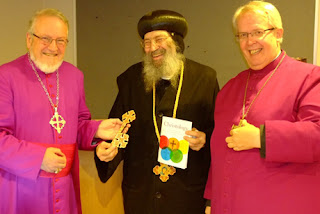 4. Foster ecumenism. The current version of the Creed with the filioque is a serious obstacle to ecumenical work. Lest we forget, the filioque was one of the primary disagreements that led to the Great Schism between the Western and Eastern Churches in 1054. The Anglican Oriental Orthodox International Commission met last week in Wales, during which the Anglican representatives agreed to remove the filioque and move the two communions closer together. Dean Ferguson clarifies that the removal of the filioque is not meant simply to placate Orthodox Christians, who have long complained about its use among Roman Catholics and others (like us), but because it's a theological aberration that needs to be remedied. More generally, the Nicene Creed is not just an historical artifact. It remains the second component of the Chicago-Lambeth Quadrilateral of 1886/8 shaped by William Reed Huntingdon as the basis for Anglican ecumenical work: "The Apostles' Creed, as the Baptismal Symbol; and the Nicene Creed, as the sufficient statement of the Christian faith" (BCP, 877). I understand that this document, like the Articles of Religion (Thirty-Nine Articles) is housed in the "Historic Documents" section of the Prayer Book, but unless I've been misinformed, the historic Creeds, along with the Holy Scriptures, the dominical sacraments, and the episcopate, are still foundational principles for our ecumenical efforts.

5. Creeds are always necessary but not sufficient. During the Diocese of Chicago's clergy conference, the Rev. Dr. Mark McIntosh, Professor of Christian Spirituality at Loyola University Chicago, pointed out that "creeds are always necessary, but not sufficient." I absolutely agree with this statement--at least inasmuch as the Nicene Creed does not speak explicitly on every topic related to God or the Christian experience. There is much that we affirm about God and our lives as Christians that are not mentioned by the historic Creeds, and so I have at times complemented the Nicene Creed on Sunday morning with other affirmations as a way to encourage people to be reflective. The historic Creeds are the starting point of a spiritual journey. The Chicago-Lambeth Quadrilateral defines the Nicene Creed as the sufficient statement of the Christian faith, which I understand to mean that it supplies the essential foundation without being exhaustive like a multi-tomed systematic theology. But it does something else. In being the foundation, the Creed drives our seeking, leading us to be ever more curious, ever more passionate for God.

I realize that for many people reciting the Nicene Creed is difficult, containing certain theological propositions to which they cannot assent. It's tough for me, too. So, I get Dr. Meyer's point. But reciting the Creed is about more than agreeing intellectually with this or that statement. It's about affirming one's belonging to a heritage of faith and practice over many generations and seeking to live into the unfathomable mystery of God that the Nicene Creed expresses. In this way, the Church would not be the Church without it.
Posted by Fr. Ethan Jewett at 7:11 PM