Of Giant Crosses and Ketchup Bottles 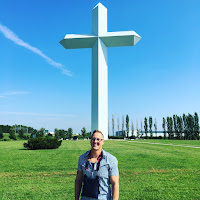 One of the great joys of being between parishes is that I now have time to read, write, and travel. As my husband and I drove through the endless corn and soybean fields of southern Illinois a couple of weeks ago, we stopped at a few curiosities along the way: North America's largest freestanding cross in Effingham, the world's largest ketchup bottle in Collinsville, and a vintage Route 66 service station in Mt. Olive. Fun and kitchy, to be sure, but also reminders that people find identity and meaning in all kinds of unexpected things. They are markers of a people's history that have become cherished across generations, and so, are worthy of study. These three detours provided a thought-provoking contrast to the much grander stops on our itinerary, such as the St. Louis Arch and the Lincoln Presidential Museum. The first, where I became reacquainted with my fear of heights, serves as an awe-inspiring monument to engineering ingenuity and prowess. The second chronicles the life of one of our most revered leaders during an agonizing period in the nation's history. As signs of human achievement, and national crisis, and local pride, all of these markers of our lived experience have the potential to teach us something important about our faith.

One of these insights is that we need to study subjects that we don't tend to examine through theological lenses. This became abundantly clear last week when viewing the special exhibit at the Art Institute of Chicago, "America After the Fall: Painting in the 1930s." The exhibit was a commentary on the multiplicity of American artistic perspectives in response to the Great Depression, including the agrarian Regionalism of Grant Wood and Thomas Hart Benton, the Realism of Edward Hopper, the Modernism of Arthur Dove and Georgia O'Keeffe, and many others. What it conveyed to me was the variety and uniqueness of these lenses through which artists attempted to process America's economic time of trial. Images of agrarian abundance and industrial might, for instance, were expressions of an American ideal of prosperity, which served as both aspiration and nostalgic escapism. But in periods of adversity, those symbols of life on the other side of want and barrenness are important for survival. Americans in the 1930s must have felt defeated and hopeless, and yet some found ways to cope.

The same was undoubtedly true for those who witnessed the Crucifixion. The Cross on which our Lord Jesus hung must have seemed so overbearing and oppressive that artists throughout the centuries have been deliberate in depicting it as insurmountable. And yet, there was life on the other side of death. What was an instrument of defeat, the Cross, was transformed into a sign of God's victory. The planks of wood nailed together in Provoost's painting at right represent a criminal's shameful death, and yet the meaning doesn't stick. And even the tomb is not able to contain the new life of the Resurrection; it becomes a sign of the destruction of death itself. Later, in the midst of Roman persecution, the early Christians must have found signs of new life in both the trivial and the important to bear their sufferings. 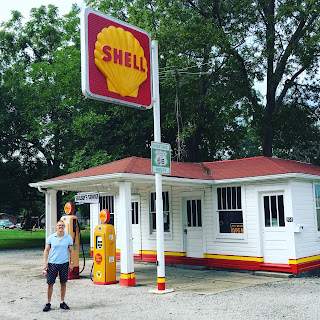 Things are not always what they seem. A giant ketchup bottle or vintage service station may be a community statement of civic pride. A series of abstract strokes of color on a canvas may express the anxiety of a lost generation or a tortured conscience. When we examine the world, we should be careful of accepting what we see at face value. And we all may see those same things differently. Signs of decay may hint at signs of life. The trivial may point to the important. The crucified criminal may point to God.