On Sunday, we celebrated the Feast of Christ the King, drawing the Church's year to a close, and now we prepare to enter Advent, a season of pregnant expectation. Yet for many in our world, the images of a victorious Jesus reigning in glory may be hard to embrace or to believe in the midst of brutal violence and suffering. 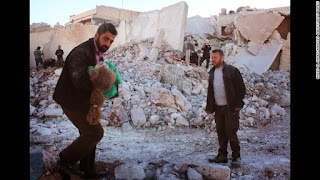 The horrific photos from Aleppo this weekend remind us that faith is often an easy luxury of those who enjoy safety, stability, and the satisfaction of basic needs. One photo showed a father weeping over his child, who had been killed in an airstrike, "I've lost everything," he cries. Reports are coming in of civilian casualties not only from the heaviest aerial bombardment in the last five years, but also from exposure to chlorine gas. One frightened boy, exposed to this chemical weapon, asks a medical worker, "Am I going to die?" Food and basic supplies are running out; hospitals and schools have become targets for violence. Many are urging the international community to take action in response to crimes against humanity. It must be hard for any person of faith--whatever faith he or she professes--to see God in the midst of all this. How can the captives believe in Emmanuel, "God with us," when the exile IS so lonely, when God feels so absent? 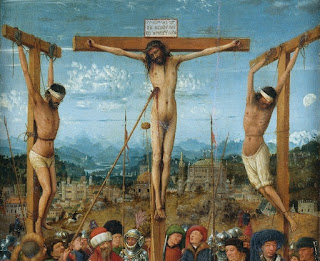 It is in the context of this world that we await--anxiously and impatiently--the arrival of the Christ-child. We hope for God's ransom of humanity from its endless captivity. And yet, when the child comes, he grows up to preach a message of peace and love that will get him killed. Jesus ends his life on earth not as a king enthroned in splendor, but as a defeated criminal condemned to a shameful form of death. This is the most unlikely scenario for a savior. The criminals flanking our crucified King of kings and Lord of lords plead with him to save himself and them from their impending deaths, which of course, he does not do. The true victory only comes when Jesus takes death as far as it can go, and then comes back from the supposed point-of-no-return. The crucified human does not do it on his own, but through the strength and power of God, which makes even the unimaginable, even the impossible, possible. That same hope is offered to us: "may you be made strong with all the strength that comes from his glorious power, and may you be prepared to endure everything with patience" (Col.1:11). 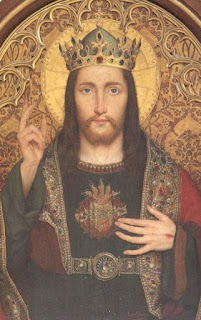 The Feast of Christ the King affirms that it is through God's power that we are able to imagine a future beyond death, beyond the bombing and chlorine gas. It declares that we must not let the now define the future. Never allow anything to deny the possibility of hope. If we are God's hands and feet in the world, as St. Teresa of Avila claims, then we should take seriously the psalmist's assertion that "He makes wars cease to the end of the earth; he breaks the bow, and shatters the spear; he burns the shields with fire" (Ps 46:9). This is not only a statement of divine power, but God's instruction for our lives. God's power fills us with the strength, power, and endurance to defy destruction and death. If we believe that a helpless child can become a savior that survives death on a Cross, then we too have a chance to overcome our own experiences of death. I believe that Christ the King mourns with us, and says, "I've been where you are; but I survived death, so that you may survive it, too." God IS with us in suffering. The Word became flesh and encountered human suffering in all its grotesque brutality; and yet, in defiance of all the odds, life triumphed over death. Advent is the season when we begin to imagine a different future for humanity that reaches its fulfillment in the reign of Christ the King. For now, we mourn the loss of life, the scope of death's sway; but we look ahead to the appearance of God's Son, and prepare to resist humanity's lonely exile.