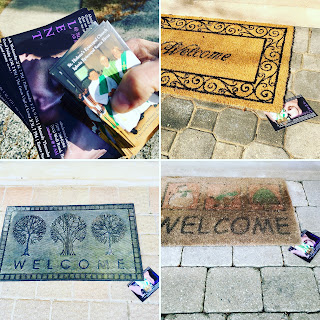 Tuesday was an unseasonably warm and sunny day, so I decided to drive to one of the large neighborhoods behind St. Helena's to deliver the postcards announcing our Lenten services. The weather was beautiful, and the ground was dry and free of snow, so I wanted to take advantage of this rare opportunity to do some hands-on evangelism and outreach. I drove to the middle of each street, got out of my car, and walked to each house, leaving a postcard and one of my business cards underneath the doormat. I very much enjoyed being outside for several hours, feeling the breeze blow through my short-sleeved shirt and doing something that priests have always done, walking the streets of their parish, being visible. It gave me time to just rest and let my mind wander.

The interesting challenge of many suburbs, however, is that this neighborhood, like many others, was deserted in the middle of the day. It was like an incredibly well-manicured ghost town filled with huge houses with tidy lawns and luxury cars parked up steep semicircular driveways. I was shocked, though, to see how many houses still had Christmas decorations up at the end of February! I left cards at probably about 150 houses, and I thought that if the people in only 2 or 3 of them would visit us, it would be worth it. The only other souls on the sidewalk was the occasional person walking a dog. I felt a bit like Jesus wandering in the desert, albeit without Satan appearing, and fortunately, only for a few hours instead of 40 days. Most houses had a doormat with the word, "welcome," on it, and I wondered, that if anyone had been home, how true that message would have been. The optimist in me hopes that most people would be kind and friendly.

At the end of my walk, my shirt was sweaty and my legs ached, but in a good way. It occurred to me that my walk was a good metaphor for ministry, particularly during Lent. Despite all of our technological advances, sometimes there's just no substitute for an old-fashioned technique like walking the streets of one's parish. It's incredibly inefficient and time consuming. It's not particularly glamorous; in fact, it made me feel pretty awkward and vulnerable, as it always does. I realized that I might hear things I didn't want to hear, and so I had practiced beforehand what I would say if anyone reacted negatively to my presence. The fact is that the Lenten journey, like old-fashioned evangelism, is hard. It requires endurance and there's no getting around doing the hard work. It is meant to be fatiguing, because that's the only way we grow, by putting in the time and energy required to be transformed and to transform others. So, who wants to go with me next time?