Gym Etiquette and the Kingdom 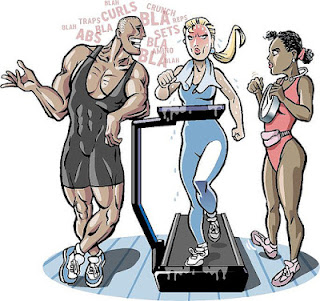 I spend most of my time in two places--the church and the gym--and there's a lot of overlap between them in my life.  Both are integral components of my rule of life; both are sacred spaces that allow me to stay healthy and grounded; and both are places of great discipline and commitment.  I often work out pastoral problems or sermon ideas when I'm lifting or running, and there's more than just a passing resemblance between lunges and genuflections.  More importantly, each milieu has its code of conduct, its rules for proper behavior that have been formed by the consensus of the assembled community.  When these rules are transgressed, the community reacts negatively, and often chastises the naughty party for their misstep.  So, I want to kvetch on a subject that's rarely addressed these days: etiquette.

Growing up a scrawny, rather unathletic kid, I became attracted to the gym because of its focus on personal empowerment and commitment to a disciplined way of living.  No doubt I gravitated to the church in part for the same reasons.  Over the twenty-three years I've been working out, I have become initiated through trial-and-error into gym etiquette.  Unfortunately, gym neophytes aren't usually presented with a list of "dos" and "don'ts," and so they often inadvertently violate gym culture taboos.  Although I try to be patient, I have to admit that I too have my pet peeves. The following list may sound a bit harsh, fussy, or uppity, but please just bear with me.  There is a theological point to all this nagging.  So, here are my Ten Commandments-style "Thou shalt nots,": 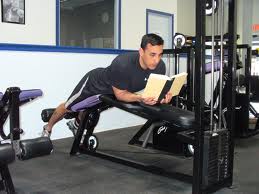 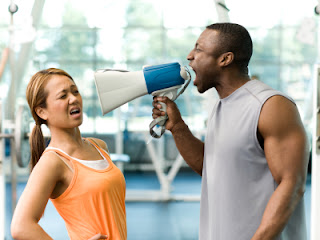 If this litany of offenses sounds like a gym rat's intolerant rant, I apologize.  My tone may be a bit snarky, but that's because these behaviors are considered rude by most seasoned gym-goers.  Many people who commit these heinous crimes, however, just aren't aware that they are breaches of gym etiquette.  One needs to be initiated into a culture in order to understand which behaviors are considered polite and which are considered discourteous.  I, too, made my own missteps and was corrected, sometimes gently and sometimes not.  In the postmodern world, so much emphasis is placed on individual choice and needs that there is often insufficient attention payed to courtesy, politeness, and consideration of others.  I am often shocked by the lack of common courtesy I witness in public places like gyms, restaurants, shops, and highways.  The truth is we've all gotten a bit boorish, and it would be no bad thing if we got a refresher from Miss Manners on how to be more respectful of each other.  We've all learned NOT TO USE ALL CAPS in our e-mails, since it signifies shouting in cyberspace, so we can certainly learn to be more civil to each other at the gym and other places, too. 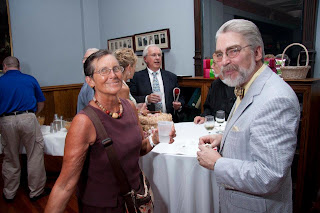 This is where I think the Church can be of some help.  Wherever else people may slack off on courtesy, they still tend to be on their best behavior in church.  We don't usually have to worry about folks shoving each other out of the way to get to the coffee, shouting obscenities down the nave, texting or talking on their cell phones during the sermon, or discarding their garbage casually on the floor.  I suspect this good behavior is driven less by fear of eternal damnation than by a shared understanding that there is a code of conduct everyone is expected to observe when they walk through the doors.  Church is still a place where etiquette reigns.  As a space that is considered sacred, we are expected to observe a higher standard of behavior than we do out in the rest of the world.  Yet this is theologically misguided.  To distinguish between so-called "sacred" space and "secular" space is to claim that parts of God's creation are less holy than others, less worthy of good behavior.  So, my challenge to gym-goers is to practice everywhere the same degree of courtesy and politeness as we do in church.  And, of course, it is not restricted to gyms, but to workplaces, grocery stores, and rush-hour traffic.  The Kingdom of God with its harmony, love, and good will cannot appear if we only practice Christian charity in church.  It must extend to all the places where we live, and move, and have our being.  Etiquette still matters.  And if you're still unclear, my copies of Emily Post and Martha Stewart are sitting on the top shelf in my office next to the Bible.  Feel free to help yourself.
Posted by Fr. Ethan Jewett at 10:18 PM