Baptism and a Broken Clutch

This past weekend, I had the privilege of participating with family in two major milestones, the baptism of my partner's two nephews on Saturday and my first Sunday as Interim Rector of Grace Episcopal Church in Chicago. Both were events of deep joy for me as a priest. And they both illustrated the truth that as much as we may try to plan, organize, and perfect our lives, circumstances can overtake us and thwart our best efforts. Then, we have to improvise. Fortunately, the Holy Spirit does some of her best work on the fly, and often shows up when we feel things are coming apart.

We had been talking about Jordan's and Jose's baptism for a while, but the timing and logistics had been difficult, particularly because two of the godparents had been living in Alaska. The planets, however, had finally aligned to get the two boys, their parents, and their grandmother to Chicago for a long visit, during which we would do the baptism. The day before, however, the parish's liturgical coordinator--who is a master of executing complex liturgies despite the hindrances of befuddled, but well-meaning, clergy like me--was unexpectedly admitted to the hospital. I walked into church not knowing if I would find everything I needed, who would assist me, or exactly how the liturgy would unfold. But the rector and parish staff pulled together and stepped into the breach to help me. It didn't go as planned, and yet the Holy Spirit showed up, and the experience was beautiful.

Later that day, I received a phone call. Ever since the start date for my new cure had been set, my mother and stepfather, Randy, had been planning to drive from Florida to surprise me on my first Sunday in my new congregation. I answered the phone, and Randy informed me that they were in Chicago. I was stunned and delighted. He explained that they had hoped to amble in on Sunday morning as I was greeting parishioners before the main service at 10 o'clock. But . . . it turned out that, even after a thorough maintenance check prior to leaving, the clutch started to give out somewhere in Indiana; and by the time, they were within ten miles of their hotel in Chicago, the car just gave up. Fortunately, they managed to get it off of the highway and onto a quiet side street. My parents were understandably disappointed that the surprise hadn't gone according to plan. From my perspective, though, I was grateful that the car hadn't died in the middle of a cornfield or 100 miles from the nearest gas station. They were safe, and I was close enough that I could jump in the car and pick them up in a matter of minutes. And I was granted the pleasure of an unexpected dinner with my family. 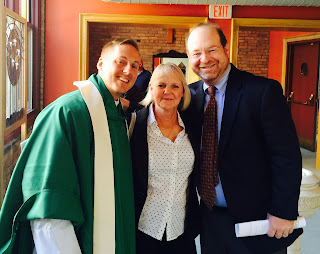 The next day, I was, of course, excited to worship with my new parish, with my family sitting in the congregation. Although I had read the service bulletin carefully, I found myself at several points in the service falling into old liturgical patterns. For example, I got confused during the Gloria, defaulted to the traditional Lord's Prayer, and neglected to use the special final blessing printed in the bulletin. But God showed up all the same, and it was beautiful. In a touching gesture, members of the vestry presented me with the former rector's white stole, which I kissed and placed over the green chasuble I was wearing, before gathering the community for the Liturgy of the Table. It is in moments like this that I am reminded that improvisation can be a blessing, allowing us to let go and grant the Holy Spirit space to move among us. The fruits of that movement are often unexpected, but beautiful. They remind us that it is sometimes OK for us to relinquish control. It is fine for things not to go as planned, because the Holy Spirit shows up and compensates for our uncertainty and stumbling. In those moments, we can relax, because God is in charge.