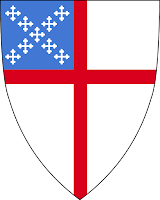 This Sunday, I will conduct the first in a series of four classes on the Episcopal Church, what are often known as "inquirers classes." Although this is standard practice in Episcopal congregations, many might ask if this is still relevant. In a pluralistic, post-denominational society, does it matter whether we are Episcopal, Lutheran, Methodist, or Presbyterian? Haven't we evolved past these distinctions?

The answer is both yes and no. I firmly believe that ecumenical and interfaith collaboration is vital to the future of the Church, but I also feel very strongly that denominational identity is still worth building and nurturing. This belief is not the result of some abstract, intellectual exercise, but rather, the experience of my own formation as an Episcopalian. Below are five reasons why I think Episcopal identity still matters.

1. Common prayer. At the heart of the Episcopal identity is the notion of common prayer. As the old Anglican maxim goes, lex orandi, lex credendi, the way we pray shapes what we believe. Although many congregations now pray from Sunday bulletins, rather than pew copies of the Book of Common Prayer, worship is still based largely on the forms and rubrics of the Prayer Book. I can't count the number of times I have been in an unfamiliar city for work or vacation and have wandered into the local Episcopal parish for a Sunday Eucharist or weekday Evening Prayer. Whether it is in a country church, like the one my great-great-great-grandmother founded, or Washington National Cathedral, the patterns of worship remain familiar and consistent. In a strange environment, Episcopal worship has offered a locus of stability and belonging that I have greatly valued in a very fluid and tumultuous world. 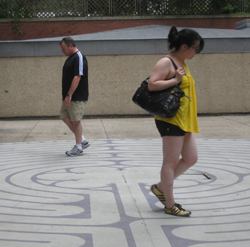 2. An appeal to intellect, emotion, and the senses. As one elderly parishioner once said to me, "the Episcopal Church is the thinking man's church." The Anglican tradition has relied heavily on deep theological thinking, informed by Scripture, tradition, and human reason. However, the Episcopal Church has also encouraged people to peer beyond theological inquiry and debate to embrace experiential ways of knowing that engage the emotions and the senses. There is something deeply transformative about sitting in deep silence with others, walking the labyrinth, offering up prayers in great clouds of incense, or joining an entire congregation as they chant the Nicene Creed. Episcopal identity and worship engage the whole person.

3. Both ancient and modern. The Episcopal Church has been described as a creedal, rather than a confessional, church. This means that the Episcopal Church does not have a checklist of denominationally specific articles of faith to which members are expected to assent. Episcopalians ground themselves rather in the the Nicene and Apostles' Creeds, which articulate a heritage of faith and belief that goes back to the earliest days of the undivided Church. We may struggle to accept some of the content of these ancient creeds, but we recite them as a sign of our relationship with the generations of Christians that have come before us. But that is not all we are. We are also open to the new things the Holy Spirit has to teach us about what it means to be children of God and followers of Jesus in our own unique contexts. In the Episcopal Church, we value the tension between continuity and discontinuity, between tradition and new discoveries about God.

5. A social conscience. One of the reasons that I came to the Episcopal Church was its progressive stances on social justice issues, such as immigration policy, the ordination of women, and the inclusion of LGBTQ people. However, I have also respected that fact that the Episcopal Church is a very big tent, incorporating people who may not agree with me and supporting a diversity of convictions and outlooks: liberal and conservative, traditional and experimental, mystical and intellectual.

The attributes I have just described are not all unique to the Episcopal Church, but in the aggregate, they shape and define our shared identity as Episcopalians. In order for an individual or a congregation to understand who it is, it needs to be steeped in the larger tradition to which it belongs, to identify where there are shared connections, and whether there is divergence.  Next week: Part II.